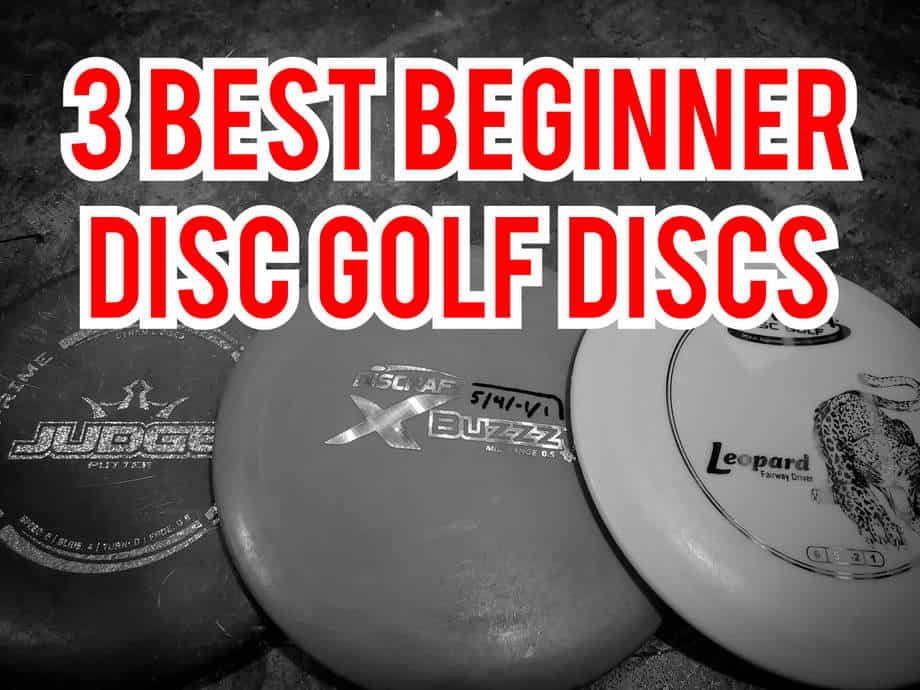 Disc golf is awesome! Hopefully you’ve already experienced how great it is in your first couple of rounds and are hooked just like I was. If that’s the case, I’d like to be one of the first people to officially welcome you to disc golf.

So if you like the sport, and you’re looking to start improving your skills on the course, you need to start by playing with the right discs! And by that I mean discs that are meant for your skill level: the beginner disc golfer.

Today we’re going to be looking at the three absolute best disc golf discs for beginner disc golfers this year: the Dynamic Discs Judge putter, the Discraft Buzzz mid-range, and the Innova Leopard control driver. But that’s just the beginning.

In this post, I’m going to go into detail about why you need these three discs, a quick disc review of all three discs, a couple of beginner tips, and I’ll show you a few of my other insanely helpful posts to help you learn disc golf the right way. Alright, let’s get to it, disc golfers!

Why you need these 3 discs

1. They are made for beginners

Like I said a couple paragraphs ago, you need discs that are made for your skill level and these three discs are exactly the right fit. If you don’t have any discs like these, you’ll want to find some beginner discs. I’ll address this in the tips section below ⬇️ and show you how to pick out beginner discs.

The three discs on this list were picked for a reason. Not just because they’re beginner discs, but because they all fly ridiculously straight. As a beginner, you want discs that fly as straight as possible, or that are stable to understable. It’s okay if you don’t know what stability is just yet because you’re new. You can check out our ultimate disc golf stability guide here. But these three discs can promise you just about the straightest flight possible. That’s another great reason why you need them.

3. So you can focus on getting better

In the beginning, you’ll see that there’s a pretty steep learning curve with disc golf. If you know nothing about the game and have never played ball golf, the first few rounds are going to be tough. The game is pretty simple, though. For me, it was the thousands of possible disc choices that really threw me off. I relied on some recommendations to help me start and those recommendations were very wrong. So I had to learn about beginner discs all the way up. For you, I’ve selected the three best starter disc golf discs and now all you have to do is learn the game. See, It’s as easy as that.

In the next couple of sections, I’m going to quickly review the three recommendations I have for you and show you why they’re great discs. Let’s go!

First thoughts: The almighty Judge! This disc really runs thr gamut for what a great disc golf putter should be. It comes in many plastic types but is most popular in its prime or prime burst plastic. The Judge, for me, has great grip in every plastic I’ve tested and is always a predictable disc. If you’ve got a shorter drive, approach, or putt that you’re unsure about, trust the Judge and it will not let you down. The Judge is a true first day out kind of disc.

Here’s what Dynamic Discs has to say about the Judge: “Why was the Judge named the 2013 Disc of the Year in the Player’s Choice Awards? It is incredibly predictable in flying and hitting the chains. It is a fantastic throwing putter that will fly straight and glide for amazing distances. It comes in a variety of different plastics so that your preferred feel is available in this disc. Come see why this disc has become so popular and judged other, more well-known discs, to be insufficient.”

When to use this disc: the Judge can be used in many short-distance-type situations. It’s really a reliable disc so you can’t go wrong with it unless you’re trying to get pure distance. Then I’d definitely try something else. For all you newbies, grab a Judge here on InfiniteDiscs.com.

First thoughts: The Buzzz is hands down one of the best disc golf discs ever made. It’s been a staple disc in my bag and has helped me learn the game a lot. The great thing about the Buzzz is that It’s a disc that any skill level can utilize. But beginners will benefit the most from it. This is a true first day out disc golf disc. But because of its versatility, it can stick with you in your bag for years to come.

Here’s what Discraft has to say about the Buzzz: “More players agree: Buzzz is the best golf disc you can buy, period. It’s an ultra-dependable, straight flying midrange that you’ll reach for again and again. Throw it hard and versatile Buzzz will hold any line you put it on. Discraft’s 30-year reputation for consistency means that if you lose it, just pull out a new one and you’re back in business.”

When to use this disc: if this is one of your first couple of rounds, the Buzzz is your best option. I took my little brother out a while back and he had never played before. I gave him two discs to try – the Judge and the Buzzz. He said he liked the Buzzz the best. The Buzzz is also a great solo round disc because it can perform as any type of disc. I’ve taken the Buzzz by itself for many solo disc rounds and it hasn’t failed me yet. If you want a Buzzz, get one here on InfiniteDiscs.com.

Word of caution: I never EVER recommend a driver to first day out beginner disc golfers. If you’re in your first two to three rounds, use the Buzzz and Judge only. What I really recommend is that you only use those two for the first month or two to learn technique and how to throw correctly. But I will give you a beginner recommendation for the Leopard because, to me, it is the easiest driver to throw in disc golf. If you get one of these, don’t throw it for the fist few rounds.

First thoughts: the Leopard is a fantastic disc. To me, it’s a mid-range disc disguised as a control driver (even though it looks and is marked as fairway/control driver). It’s very easy to control and is capable of some decent distance. Once you become an advanced player, you’ll probably look to

Here’s what Innova has to say about the Leopard: “The Leopard should be everyone’s first fairway driver as it is has excellent glide and is easy to throw straight and far. The Leopard is a great turnover disc for players of all skill levels. More experienced players can use the Leopard for throwing distance stretching ‘Hyzer Flip’ shots. The Leopard makes a dependable long range roller.”

When to use this disc: if you’re stepping up from mid-range discs to drivers – i.e. your first driver – you should use the Leopard. This disc, like Innova says, is great for those tough hyzer flips. This is a great disc to learn those on. You can also perfect anhyzer shots with it. To get a Leopard, check them out here on InfiniteDiscs.com.

The best tip for beginners

The flight ratings system is a brilliant system created by Innova discs to help you understand exactly how a disc flies. The system is comprised of four numbers that each represent a characteristic of how the disc flies.

The first number is 6. That represents the speed of a disc. It runs from 1-15. And it shows how fast a disc must be thrown to fly correctly. As a beginner, you want a lower speed disc. A 6 is about the most speed you want as a beginner.

The second number is 5. That’s the glide of a disc. That runs from 1-7. The glide represents how far a disc will fly through the air or stay in the air. As a beginner, you want more glide.

The third number -2 and is the high-speed turn. This runs from -5 to 1. Turn is how much a disc will turn over to the right (with a right handed backhand thrower -rhbh) immediately after being thrown. As a beginner, you want lower speed (like the Leopard which is around -2).

The fourth number is 1. This is the fade of a disc. Fade ranges from 0-5 and is how much the disc turns to the left at the end of it’s flight (rhbh thrower). As a beginner, you want a lower fade like the Leopard at 1.

All of this can help you pick the right discs for your game.

For more on the numbers on a disc, check out our post on flight ratings here.

A couple of super helpful posts

Don’t forget about the book!

The original Star Frame Brick Bag was a game-changer for disc golf cooler bags. Disc golf bags in general, really. Up to their release of the OG Brick bag, cooler bags were honestly pretty...