The one thing that helped a lot of us disc golfers get through the last few years was disc golf. And because of that, disc golf flourished. Our sport has grown tremendously. 2023 looks to be one of the best yet. With that being said, I’ve brought you this year’s list of the 7 best control/fairways drivers of 2023!

But before we check out that list, I want to go over a couple of things real quick:

3 reasons why you need a control/fairway driver

Control drivers don’t have to be thrown nearly as hard as distance drivers. With that being said, you can get fantastic distance from a control driver without having to throw it ridiculously hard. These drivers are also easier to control on those somewhat long approach shots or drives. They’re “control” drivers and control over your shots is exactly what they give you.

Control drivers allow you to maintain control and get that distance that you want, all while helping you stay focused on playing with good technique.

3. Distance drivers? Nope, not yet

So you can see that control drivers are somewhat easy to throw. And that they’re good for getting good distance while helping you still focus on good technique. But there’s another reason why you need to throw control drivers…

What’s the difference between control and fairway drivers?

While there are arguments for the differences between control, fairways, and even power drivers, there is no difference. They are all medium-range drivers in between mid-range discs and distance drivers and are called fairway drivers or control drivers based on a person’s preference or what a company wants to call the disc.

So as you see in the title, it says “best control/fairway drivers.” When I first started playing, I was curious why these drivers had multiple names. Well, upon researching a little bit, I came upon a debate in the disc golf community. That debate surrounded whether or not there were two different types of drivers in the control and fairway categories of drivers.

The other side of the argument says that control/fairway drivers are called both names and sometimes just differentiate because of how the disc is labeled (i.e. the disc might say control driver but also be called a fairway driver). Whatever speed the disc is doesn’t matter.

Technically, there are discs called fairway drivers. There are others called control drivers. And then there are a few that are called power drivers or hybrid drivers. There is a good argument for differences in all of these discs.

But the two sources for my belief that there is no difference between control and fairway drivers are two of the biggest disc golf companies in the world. Let’s check them out really quick:

Dynamic Discs: if you look at their Beginner’s Guide to Disc Golf post here, you’ll see that they only list “Fairway Drivers” under “Distance Drivers” and above “Mid-range.” There is no separate category for Control Drivers. 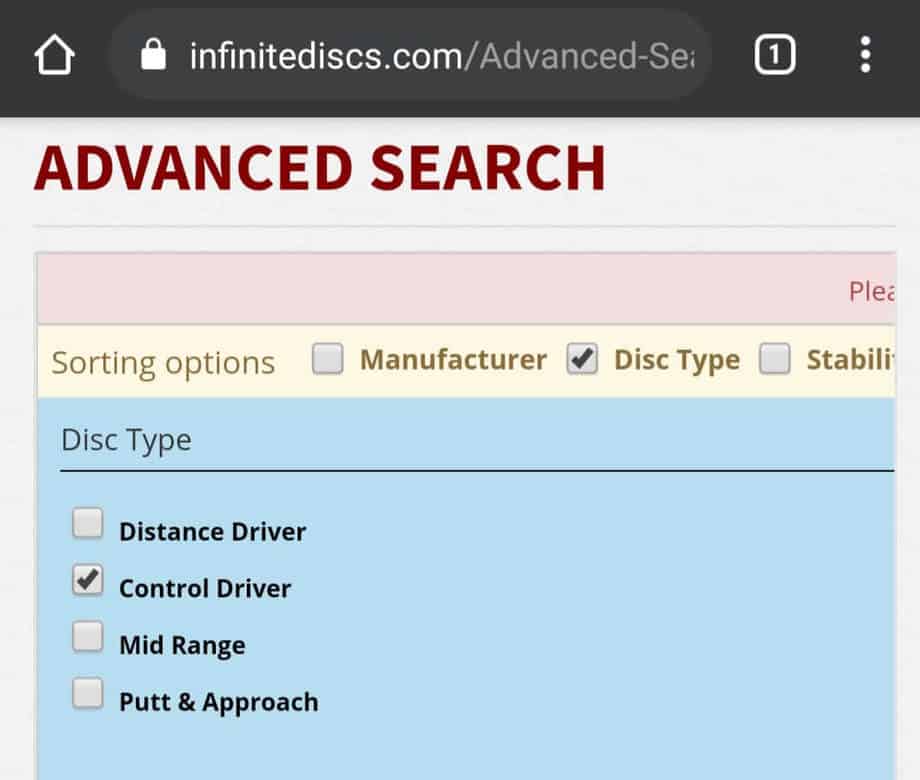 Infinite Discs: if you go to their site and perform a disc search on their “advanced disc search” tool, you’ll see that the only option listed for the category is “Control Driver.”

So you can see, there really isn’t a difference between control and fairway drivers. It’s just a preference on what you want to call them.

But I, personally, am just on the side of simplicity. I don’t overthink my game and my discs. I don’t think it matters all that much anyways so I call discs both control and fairway drivers. As a disc golfer, this is how you should think. You need to learn the game and build your skills up – from putters to mid-range discs to control/fairway drivers and distance drivers.

Don’t worry too much about the fine details until you become a highly-skilled, competitive disc golfer. Once you get to that level, then you can choose to differentiate the discs or not.

The Dynasty is one of Infinite’s newest discs and it also has the reviews to back up its popularity. This disc is fun to throw, with flight ratings of 9, 5, -1, 2, and is very accurate to boot. If you want an insanely precise fairway driver, this is it.

Here’s what Infinite has to say about the Dynasty: “The Dynasty is a stable fairway driver. This control driver offers enough stability to provide a consistent “S-curve” flight. Also, it can still fly most any line you would want. Making this into a highly controllable disc. All the while it can achieve good distance for beginner and advanced players alike.”

Grabs yours here on InfiniteDiscs.com.

Y’all, this disc is IT! No, seriously, this disc is actually called, “IT.” Not really a very popular new release, but an interesting new fairway driver from Innova Discs that sports flight ratings of 7, 6, -2, 1. The IT is a fairly understable, fun, control/fairway drivers for all kinds of players. If you’re newer, you’ll appreciate the understability. If you’re more advanced, the understability is perfect for long hyzer flips.

If you’d like to try out the IT, grab yours here on InfiniteDiscs.com.

The Grackle is a new disc from the Mint Discs lineup and looks to be a very interesting disc. It’s a slow-flying, highly-controllable, and stable fairway/control driver. With flight ratings of 7, 5, -1, 2, this disc just might be one of those fairway drivers that you first start out with as a newer player. I’m excited to try this disc out!

You can check out the Grackle here on InfiniteDiscs.com.

Streamline is another brand that just keeps pumping out great new discs. The Ascend only continues that trend. This excellent fairway driver aims to please all players, but is a really great starter driver for newer players (with flight ratings of 6, 5, -3, 0.5).

You can also get it here on Amazon.

The Prodigy H7 is an interesting “hybrid control driver” from Prodigy. With flight ratings of 9, 5, -4, 1, “the H7 is a fast, very understable driver from Prodigy. The H7 will be a useful tool for a wide variety of players. It’s understability will help beginners and lower arm-speed players throw long turnover shots. Players with more power will achieve hyzerflip turnovers and long rollers.”

Grab yours here on InfiniteDiscs.com.

I’m excited about this one. I’ve been a fan of Westside Discs for awhile now and I’m very ready to test out this disc. With flight ratings of 8, 6, -0.5, 2.5, the Bear appears to be a somewhat overstable, yet slower control driver. From what I’ve seen about this disc, if you bag the bear, you control the fairways.

Get yours here on InfiniteDiscs.com.

With flight ratings of 7, 5, 0, 3, the Latitude 64 Royal Grand Glory is a dependable overstable fairway driver with A LOT of fade.

Infinite Discs states that, “the Glory is made for the advanced player, but players with slower arm speed will definitely enjoy the overstability during windy days.”

If you’d like to try out the Glory, check it out here on InfiniteDiscs.com.

So there’s the list. Hopefully you’ve found a couple of great fairway/control drivers to help out your rounds on the course. I’m glad we could help. This year should be great. Now get out on the course and go crush it! For more, check out some of our related content below.

Check out the book!

Before you go, don’t forget to check out the best beginner disc golf book on the planet, “The Disc Golf Player’s Manual.” This ebook is packed with over 200+ pages of the best tips, tricks, and advice for new players.