When I was brand new to disc golf, I was really bad. Oh, yeah, I’m talkin’ WTF-Richard-throw-your-disc-into-that-tree-10-feet-away bad. But I still had fun because, c’mon, it’s disc golf! So for the first year, I played a lot doubles disc golf with my friends. And I learned quite a bit about how to play doubles in all its glory.

In this post, I’m going to lay out a quick guide for you about doubles disc golf. We’ll be looking at solo play, casual doubles, and competitive play as well as the PDGA rules for doubles, how all of this can help you get better, the different types of doubles play (most popular types to least popular types of play), and 3 tips for your doubles play. Alright, let’s get to it!

What exactly is doubles disc as golf?

Also called party golf, doubles disc golf allows you and a friend (or multiple friends) to all play together in various game types that allow you to work together to achieve a better score. Doubles can be played in a couple of different ways, with the most popular game type being best shot disc golf. Doubles disc golf is a fun way to play if you’re playing through a casual round.

The Official Rules of Disc Golf’s Appendix B contains the rules for Doubles and Team Play. You can find the entirety of Appendix B here on the the PDGA website.

Below is a summary of the official doubles rules as listed on the PDGA website ⬇️. 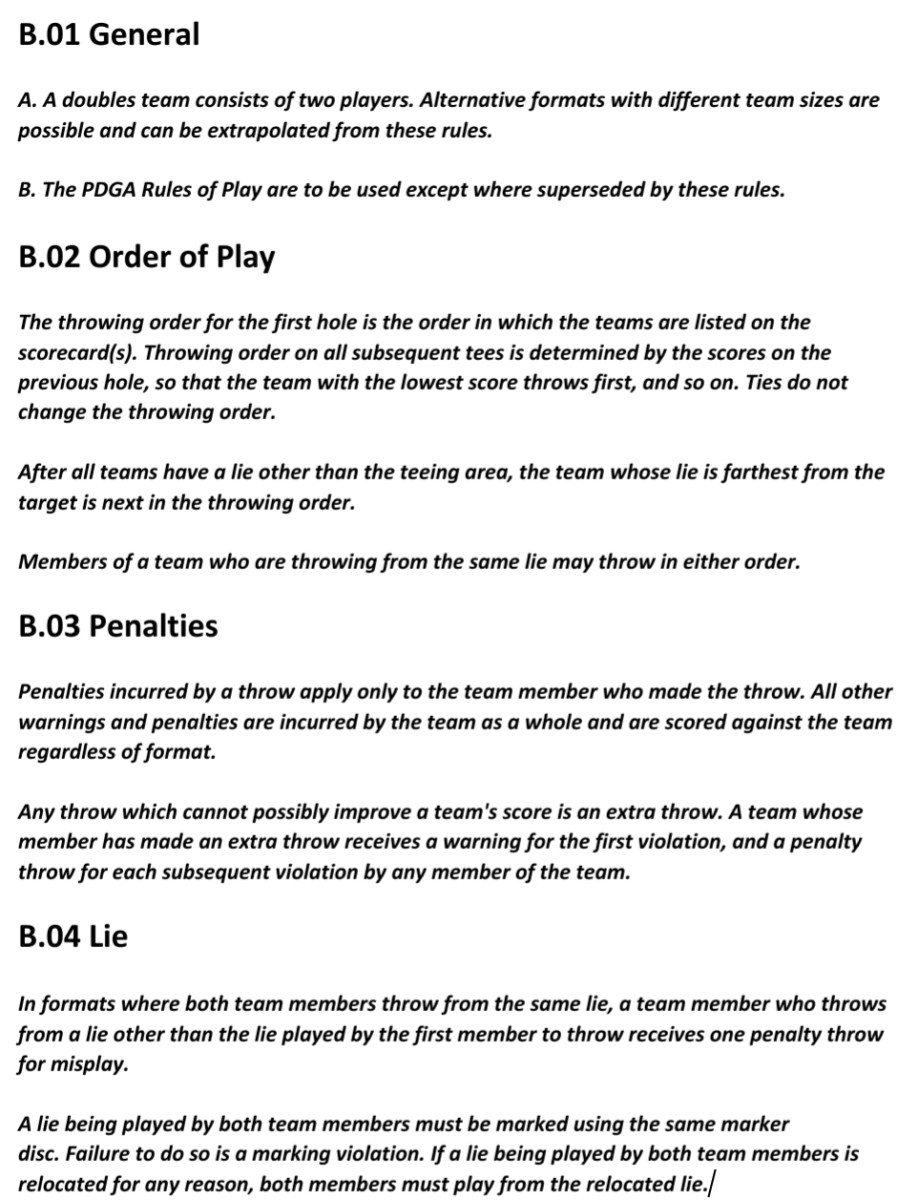 Why will this help you get better in disc golf?

I love doubles disc golf and I have since I first started playing. Why?

• Doubles is a no pressure way of playing: if you want, you can go out with your buddies and play teams just to play. And if you’re trying to keep scores down, you’ll be able to. Because both you and your partner(s) will probably throw a good shot or two.

• It can be be competitive or casual: you can play a casual doubles round with any of the different types of play listed below. Or you can ramp it up to super competitive and play for bragging rights. Check out the following seven different ways to play doubles disc golf below ⬇️.

The different types of doubles play

Best throw is definitely the most popular way to play doubles disc golf. And it’s super simple as well.

Both team members will throw off the teepad at first. The team then chooses which of the two discs to play from on the next throw. So basically, whoever’s shot was better is where you will both throw from on the next shot.

You all will throw from the next chosen lie and once again, will pick the best throw. Once one player is able to hole out, that hole is completed. Both team members don’t have to make it in the basket. Now just add up your score. This will be the number of throws from the lies that were played plus any penalty throws (throw 1 ➡️ best throw chosen ➡️ throw 2 ➡️ best throw chosen ➡️ throw 3 to hole out = 3 throws).

This game type is undeniably frustrating but can add an extreme twist to your rounds.

This game type is similar to worst throw, but only requires one team member to hole out.

The team picks which team member throws first on the first hole. From then on, you alternate who throws at every throw. First you, then your buddy after your throw, then you after his throw. A hole is completed when either member makes a basket.

For combined score, you play as though you’re playing a singles round. But after each hole, you add up the score. Each player throws their own disc, and the players’ scores are added together to make their team score. Not the most popular way to play, but this one is still fun.

Let the better of the two throwers throw first for three reasons. First, the better player doesn’t want to see a bad throw and then be pressured when throwing. Second, the player who’s not as good, when seeing the better player absolutely sling the disc, will probably have a better throw. Third, the better player going first allows a bit of freedom to take a bigger risk on their shot. Even if your throw is terrible, the second player can come in and get a decent throw in to save the score.

2. Know the throwing order (and keep it)

Establish a throwing order early and keep it. Once you’re in a good groove and playing well, you don’t want to have to think about trivial things like who’s throwing next. Throw in order based on our first tip and keep that throwing order.

This last tip is probably the best one on this list. No matter what kind of doubles gametype you’re playing, don’t be afraid to risk it all. This just means that you shouldn’t stick to a singles mindset. It’s you and someone else both getting a chance to play almost every single shot, so don’t ever play it safe during a normal doubles round. Make it a point to try a tough gap or to make a 50 foot putt. It’s ok. Take the risk…because it will pay off in doubles.

Before you go, I want you to try out what I’ve called, “Single Doubles.” This gametype is casual and is played by just you. Basically, you’re playing doubles by yourself using more than one disc. It’s kind of like having a partner but you’re throwing both discs. I like to play like this sometimes because it takes some pressure off when playing a tougher course or if I’m just looking to get some more throws in during my round. I normally throw my first shot as normal, then I use the second shot to take a risk or take a shot I wouldn’t normally take. It’s fun and it can get you some extra practice. So try it out!

Looking for more awesome content? Check out a couple of our best posts below!

The #1 Way to Improve Your Disc Golf Game This Year

Before you go, check out our book, “The Disc Golf Player’s Manual.” This awesome ebook contains over 200+ pages of the absolute best disc golf tips, tricks, and information in the game today.

Also, be sure to smash those share buttons below!!