The hyzer and the anhyzer disc golf throw: something very mysterious to the beginning disc golfer yet an invaluable tool for the advanced player.

If you can learn and understand these two concepts, or ways of throwing, your game can dramatically improve within just a couple of rounds. Later in this post, we will also be looking at some more advanced throws using the hyzer and anhyzer concepts. But before we dive in, remember this – the angle of the disc, along with the disc’s stability, will completely affect a disc’s flight and how you will play the game. The difference between hyzer and anhyzer throws is extremely important. So what the heck is a hyzer and an anhyzer?

Hyzer vs. Anhyzer: what’s the difference?

Hyzer and anhyzer throws are referring to the angle of the disc upon release from the hand. Essentially, there are only two angles a disc can have: the hyzer and the anhyzer. A disc can be thrown straight, but that’s not an angle.

Note: In this post we will be looking at hyzer and anhyzer in disc golf (from a rhbh perspective).

The angle, not the throw

Learn more than just the basics. Learn how to play the right way. The Ultimate Beginner’s Guide. 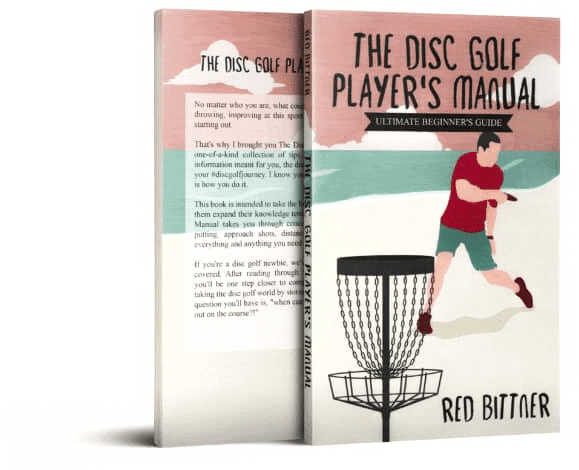 Check it out here.

1. Ob or water: if the hole you’re on has out of bounds or water around it, you may be able to use one of these shots to park the disc in a safe location.

2. Obstacles: if there are obstacles in your way on a hole, you can use any of the shots in this section to your advantage. If you learn all of these shots and throw them well, you can really gain an advantage as a serious player. The pros take advantage of these throws all the time.

3. Sharp course angles: courses that have sharp angle dogleg left or dogleg right holes are tough to play. Some of these throws can help a player with these weird angle holes.

But why do I really need to learn this?

Well, to put it simply, if you want to get better at the game of disc golf then you have to learn about the disc flies. The hyzer and anhyzer angles are just the start of how a disc can fly through the air. But you need to understand how a disc flies by how it’s released from your hand (the angle of release). If you can master the angle of release, you can get that much closer to perfecting your throws and your game.

There are a couple of different types of disc golf throws 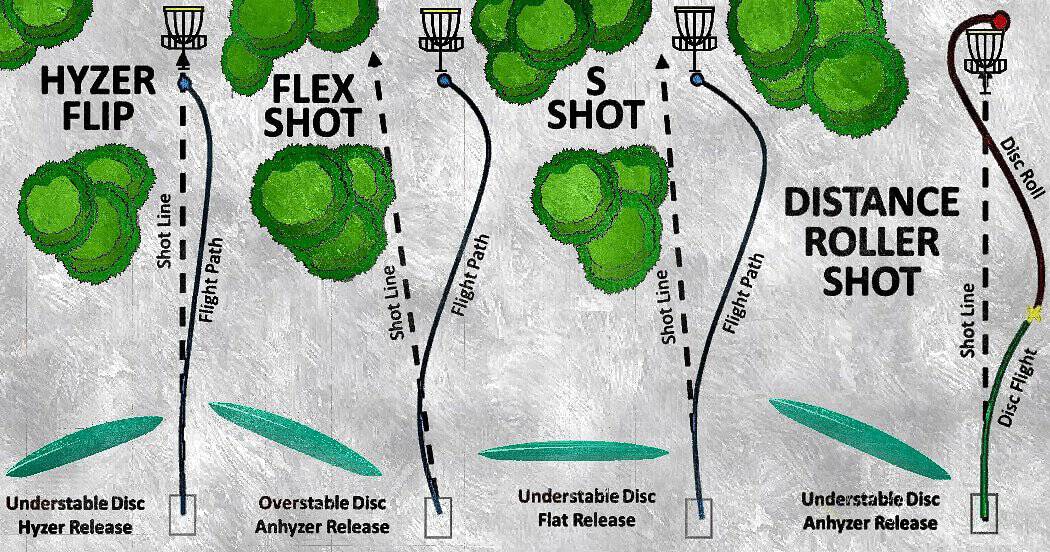 What is a hyzer flip?

The hyzer flip is completed by starting out with a very understable disc and throwing with a hyzer release. Aim directly toward the basket. Once you throw, the disc will start out going slightly to the left with the hyzer release. The understability of the disc will pull it to the right with the ending fade making the disc trail back to the left. This shot is moderately tough, right in the middle of the next two shots. Check out the hyzer flip in the video below.

What is a flex shot?

The flex shot is accomplished by throwing an overstable disc with an anhyzer release. Aim to the left of where the basket is. The disc will start out by immediately turning to the right because of the anhyzer release and then come back around with the fade and finish to the left. This shot is usually the hardest of the three to master but is so helpful if you can nail it down. Check out the flex shot in the video below.

The S shot is thrown by using a very understable disc to start out the shot. A person would aim a bit to the left of the target and release the disc with a flat release. The disc will naturally turn immediately to the right because of the understability and then end with a fade to the left. This shot is usually the least consistent of the three shots listed in this section, but is just about the easiest to throw. It’s also different from the flex shot based on the angle of release and understability. It is interesting, though, that both the S shot and the flex shot fly similarly. Check out how the S shot flies in the video below.

What is a roller shot?

A roller shot is a disc golf throwing technique where the disc rolls along the ground rather than flying through the air. You complete a roller shot by throwing the disc with an extreme anhyzer angle, usually with an understable disc and allowing the disc to turn over and roll on its side down the course. These shots are really cool looking and go ridiculously far if thrown correctly. Check out this great roller shot resource by Best Disc Golf Discs on YouTube.

1. Your discs: Make sure you’re throwing with appropriate discs for your skill level and for whatever throw you’re trying to complete. Don’t use an overstable disc on a roller shot because that would void that particular shot. You have to be smart about how you play and what you throw. If you do that, your shots will improve.

2. Practice: it takes a lot of skill just to throw a disc straight let alone a hyzer flip or flex shot. You have to put in the work over and over and over again. When you think you’re getting better, keep practicing. These shots take practice and…

3. Patience: over time you will master every throw. Disc golf requires a tremendous amount of patience because you will not get everything right the first time…or the second time…or the third time. Disc golf takes years to perfect. I’ve been playing consistently for multiple years now and still know that I have a lot to learn.

4. Learn Forehand and Backhand: you will eventually need to learn every shot and every way to throw. If you’re a serious player, it’s a necessity. Having both of these shots perfected can help you turn your game from amateur to advanced and up to professional if you put in the effort.

5. One at a time: try to only practice one type of shot at a time. If you throw a regular throw, then forehand, then flex, then hyzer, then a roller shot, it will take you forever to learn them all. It’s tough to learn a lot of different shots all at the same time. You need to lock down and focus on one specific shot and work on mastering that shot.

Bruce Lee once said it best:

If Bruce Lee were a disc golfer, I think he’d be a helluva good one!

Looking for more? Check out some of our related content below!

Before you go, don’t forget to check out the best beginner disc golf book on the planet, “The Disc Golf Player’s Manual.” This ebook is packed with over 200+ pages of the best tips, tricks, and advice for new players. Im telling you, this book is epic. If you want to seriously improve in disc golf, you need this book. So don’t miss out!