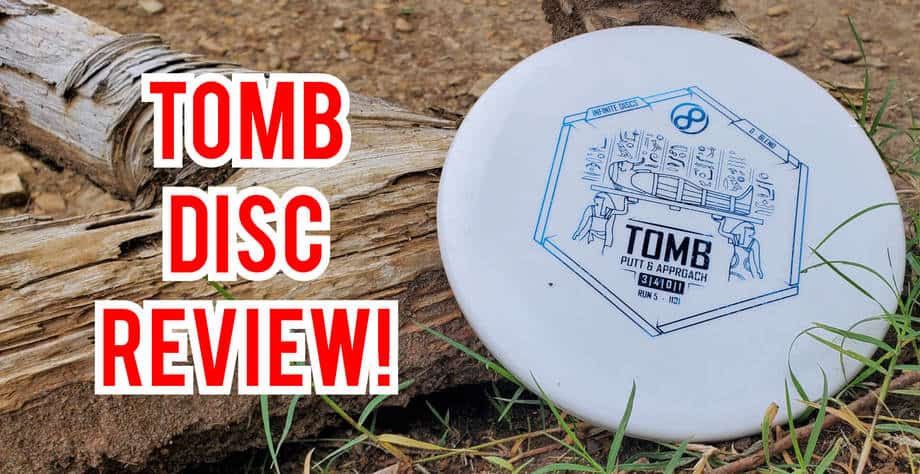 From the very first time I played disc golf, I was hooked. It was an exciting game made even more fun by all the different courses, throws, and discs you can use. I played a lot in the first year. And it helped that I found a couple of great discs to use including the Dynamic Discs Judge and Sheriff, the Innova Leopard, the Discraft Buzzz, and the Westside Discs Harp.

Of all the discs I used, the Westside Discs Harp was one disc that I really liked a lot. It was great for almost all shorter situations on the course. The sad thing was that I couldn’t find any putter that I liked like the Harp for a long time. I wasn’t too worried but I wanted to find a different putter that felt somewhat similar. Finally, I found one. Infinite Discs sent me a starter set of 8 of their best discs and asked me to check them all out. The only cost: a simple review of their discs. So I put them to work. All of the discs performed great. But there was one disc that I liked the most…the Infinite Discs Tomb putt-and-approach.

In this post, I’m going to go over everything to do with the Infinite Discs Tomb and review it as best as I possibly can. Hopefully this review will help you make a decision on whether you want this disc in your bag or not.

General info about my disc 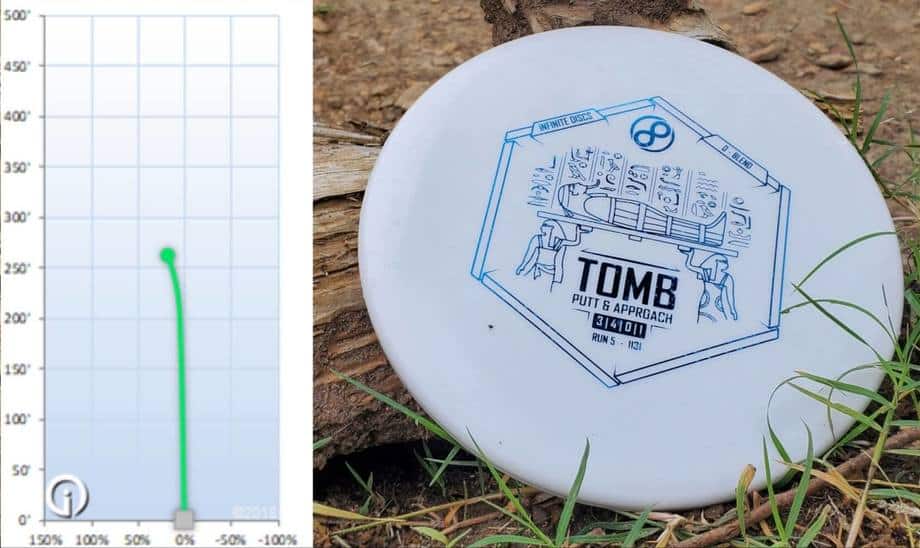 The Tomb, released in 2018, has been a very welcome addition to the Infinite Discs lineup and is a solid putt-and approach disc. You can see the dimensions of the disc above and can expect this disc to not just putt well, but to get good distance, too (anywhere from 250-300 feet depending on your power).

The flight ratings on the Tomb are pretty straightforward and the disc flies on point with its ratings. I like that about the Tomb. The only thing I’d change up would be the glide because of how much it has but a 4 glide rating is adequate.

The Tomb is a pretty straight forward putt-and-approach disc that could really double as kind of a straight mid-range utility disc. It can putt and it can approach really well. But it shines on short 250 foot drives. I wish that I could rename this as a “utility approach putter” or a “mid-range putter.”

As of 2021, Infinite Discs subcontracts with Innova to make the Infinite Discs lineup of discs so the plastics are generally the same with a different name.

The Tomb comes in the following plastic types:

Profile of the disc 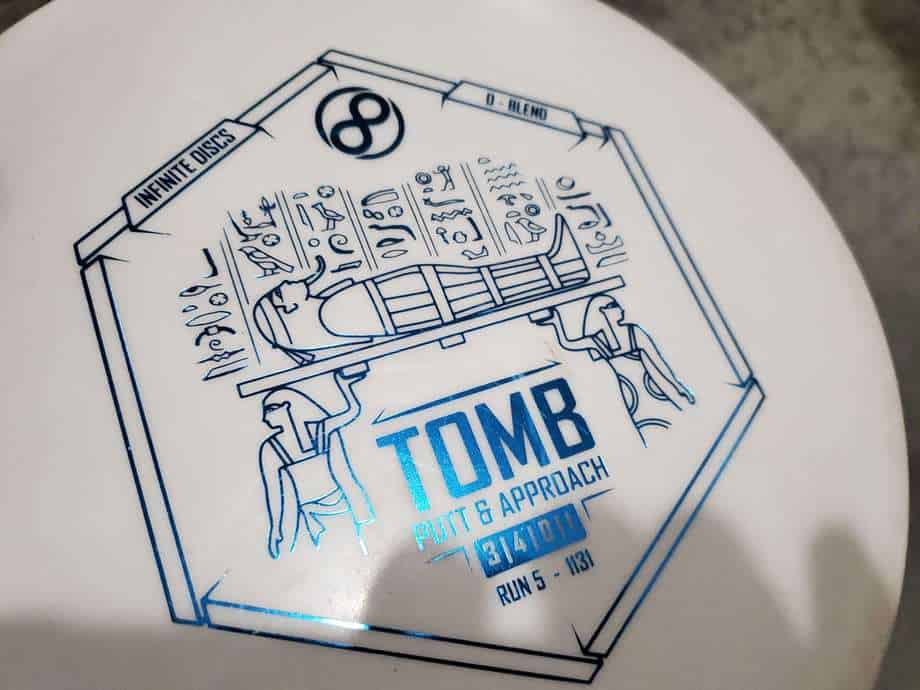 The profile of the Tomb shows us a fairly flat disc on top. This flatter, slimmer profile makes the disc a little more aerodynamic. The rim of the disc has a small bead, which some players like and some don’t. 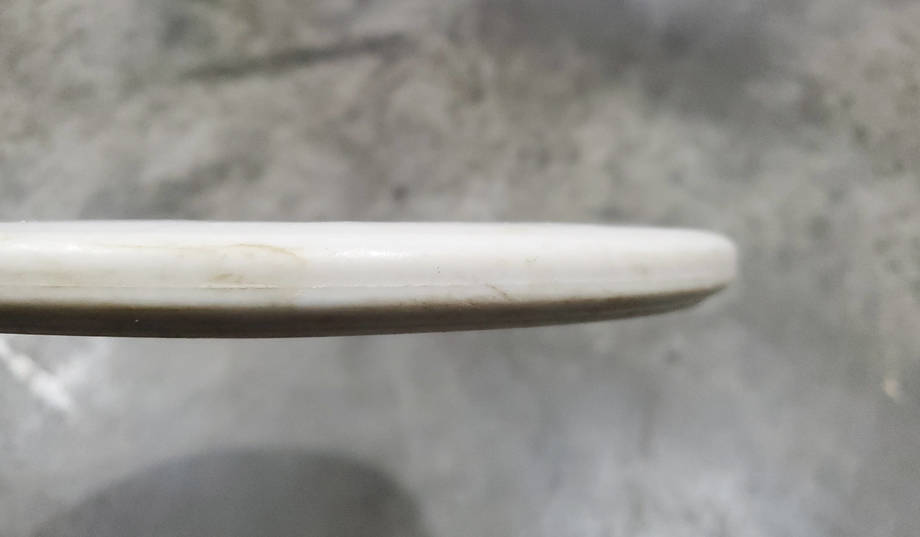 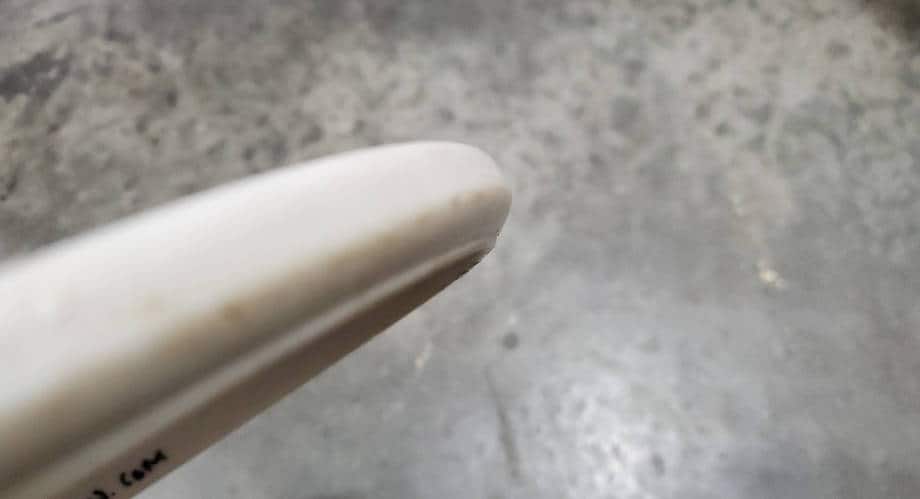 What Infinite Discs has to say about it

“The TOMB is a flat-topped, low-profile, putt-and-approach disc with a comfortably smooth, beaded rim. The Tomb has just the right amount of stability to cover ground while threading the needle on approach shots, whether thrown forehand or backhand. It can also be used as a crossover mid-range, driving putter, or to hold the line while putting for distance or in moderate winds.”

My overall rating and thoughts

After playing a few rounds with the Infinite Discs Tomb, I REALLY like this disc. It has been a smooth and welcome addition to my bag for the rounds that I’ve played. It has qualities that favor almost any disc golfer on the course and will really help you in almost any putting/approaching situation. While I favored it more for approaches and short drives, it has the potential to be the quintessential putter in your bag.

On a scale of 1 to 10, I’m rating this putter at 8/10. Now I’d say that’s a pretty good grade overall because the putter itself is overall a very good putter. I’m not going to rate it above that because I believe it falls into the category of a few other really good putters like the Discraft Zone and the Innova Aviar.

The Tomb is very good. The pros of this disc make it so. But there are a couple of cons that pull the rating down to a 8/10 for me. I’ve listed those below in the Pros and Cons section.

The Tomb also has an official rating on InfiniteDiscs.com: 4.88 stars out of 5 with over 100 reviews.

The Tomb is a fairly straightforward disc and so you’ll easily understand how it flies over the next couple of paragraphs.

1. Flat – I found the Tomb to fly fairly straight upon release and hold for a few seconds before giving a gentle fade at the end of it’s flight.

2. Hyzer – The fade that the Tomb gives is spot on for those hyzers that need a tiny bit of fade to be perfect. After throwing it on a hyzer, it holds the line all the way into the ground.

3. Anhyzer – as for anhyzers, it holds the anny curve just about all the way into the ground. That small bit of fade on the end doesn’t really come into play on a strong anhyzer.

For more on how the disc flies, check out Hyzer Owl’s quick review and flight pattern video below ⬇️.

1. Exceptional glide: the 4 glide rating doesn’t really do the disc justice as I would personally rate the glide as a 5 (3, 5, 0, 1 would be my overall flight rating). If you want a putt-and-approach that really stays in the air, you’re looking for the Tomb.

2. Phenominal driving putter: did I mention the glide? Yep, that’s the Tomb’s glide and overall disc makeup allow it to be a fantastic approach and driving disc. I used it mainly for approaches and drives and it really helped me in a lot of situations on the course. I also really liked the Tomb in my putter only rounds.

3. Holds your line: you may get a small amount of fade at the very end of flight but this disc can really hold a line if you put it on one. My flat throw stayed level and straight then faded ever so slightly on the end of flight. But with a 1 fade rating, I expected that.

1. Not as good for putting: although this is a putter, that’s not what I ended up using it for. I mainly threw it for approaches and short drives. The disc itself feels good but it just wasn’t for me as far as putting goes. I tend to prefer more of a bulky disc like a Dynamic Discs Judge or a Gateway Wizard. The Tomb is just a bit too slim for me when it comes to putting.

This was really the only complaint I saw from the #discgolfcommunity. The majority of players really like this disc. But there are a few like me who prefer a bulkier rim and who don’t like the Tomb as much for putting. Nothing wrong with it as a putter but that’s just my preference.

Putting tip: if you do like this as a putter, grab a Tomb in D-line plastic as it’s just a bit gripper and seems to grab the chains pretty well.

2. Not for true beginners (on approaches or short drives): this disc is great for any player in regards to putting. It will putt straight and you won’t have any issues there. But if you’re brand new, I would not use this disc for approaching, driving, or solo disc rounds. Instead, I would opt for a Dynamic Discs Judge or an Innova Aviar first. Then make the Tomb your next selection.

If you’re looking for a quick review video, check out the one below from Infinite Discs ⬇️.

Where to get this disc

There are two places to get the Tomb:

1. InfiniteDiscs.com – I would highly recommend getting this disc from Infinite Discs since this is their brand. Since they are the one’s who get it made, they normally have the best prices and the shipping is fairly cheap.

2. Amazon.com – Getting them from Infinite Discs through Amazon is also another great option. If you can’t find them on InfiniteDiscs.com, grab one here on Amazon.

If you’re looking for some other great discs, check out my recommendations below ⬇️!

New to disc golf? Check out the book!