I love disc golf. But there are a couple of things that I hate. The first is losing discs. That just absolutely burns me up. And the second is when lost discs, with contact information on them, are never returned to their owners. And some people may not know how to get those discs back to the current owners. But a lot of people just don’t care or even try to return lost discs.

So today, I’m going to be talking about a few things. The first is that big controversial question that the disc golf community debates constantly: should you return a lost disc golf disc? Then we will go into how to return lost disc golf discs. Lastly, we’ll talk a little bit about how to not lose your discs.

What happens when you find a disc?

When you hit the course, whether you play a lot of not, it’s inevitable that you will find discs. I can promise you that, over time, you will run across at least a disc or two that was left in a basket, on a basket, near a basket, or just randomly along the course somewhere. I found about two or three discs like this in 2018 and I played probably 40 rounds total for the year.

As you go about playing, you will start coming across random discs. Like I said, it will happen. When it does, it should spark a little bit of joy and curiosity. Hmmm, what is this new disc? Next, you will need to check the disc and see if the owner has left his or her mark: a name, phone number, email address, or any clue as to who this mystery person is. That’s an important part of the return process.

Now that you’ve found a lost disc, you face a moral dilemma that you must make a decision on:

Should I return a lost disc golf disc to its owner?

That question has probably been debated on disc golf forums more than anything else in disc golf. And I get that there are two sides to the argument.

One side says that the discs have been lost by their owners and whoever finds the disc is the new owner. Finders keepers and all that jazz. The other side stresses the importance of getting the disc back to its owner. It isn’t your disc and keeping it would be stealing it.

Both sides may have a point, but I believe that you should always try to return the disc to its owner as long as there is something on the disc indicating who it belongs to. Yes, you should return a lost disc golf disc. That is my view and the view of DiscgolfNOW.com.

If there’s nothing on the disc

When I’m out on the course and I find a lost disc, I immediately turn it over to see what’s on it. When I thoroughly examine and find no marking, numbers, name, email, or any other information that can lead me to another golfer, I get super happy. Why? Because I just got a new disc! Now if someone comes around during my round and specifically asks about that disc that I found – like the make, model, color, etc – I will give it back. But other than that, a found disc with nothing on it is now your disc.

If there is something on the disc

How to return a lost disc golf disc

Once you find a lost disc, you need to figure out how to get in touch with that person.

1. Get in touch: figure out if there’s a number on it first, and if there is, immediately call the number. If no answer, leave a detailed message about the disc and then text that number with the same information. If the person answers, let them know that you have their disc and that you want to get it back to them. Only an email address? Try sending a detailed email and wait for a response. Try to get them to call you. 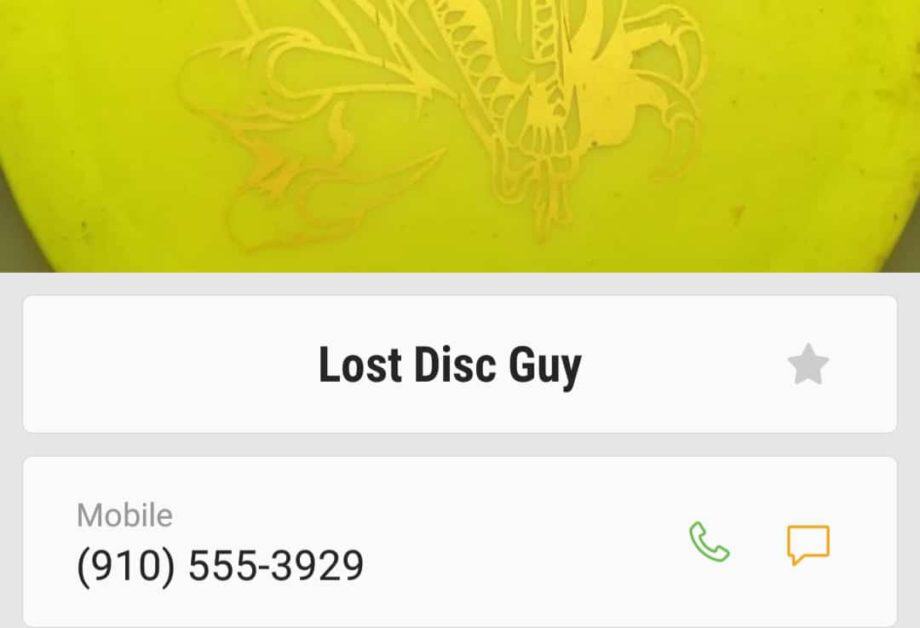 2. Figure out a meeting location (but be careful): the easiest way to return a disc is for you to just meet somebody and give it back. Be careful when meeting with somebody you’ve never met. Most disc golfers that I’ve met are pretty cool. But that doesn’t mean everyone will be. Figure out a safe location to meet, like in front of Walmart or outside of a high-traffic gas station. Pick a good time during the day and get the disc back to that person. I always try to meet first before going to the next option. Here’s a good tips list on HuffingtonPost.com for meeting people online and in person. 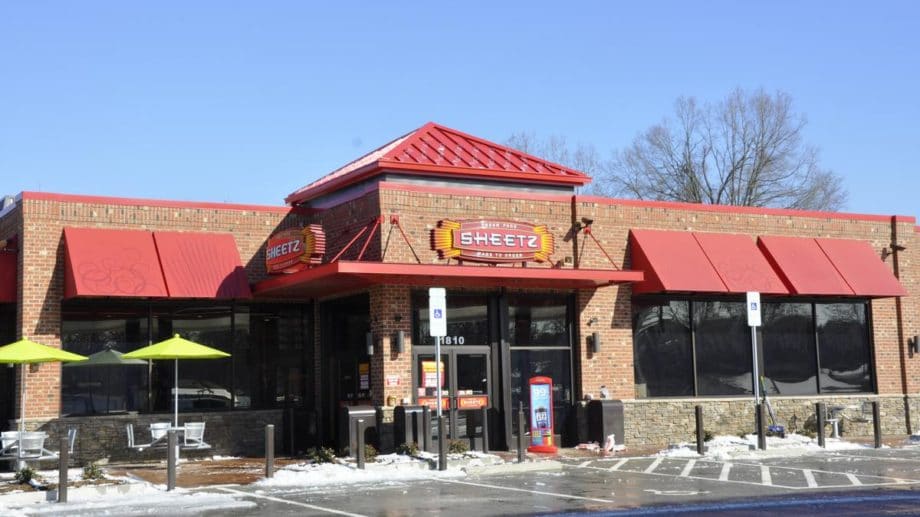 3. Mail it to them (if needbe): if they live an hour away or farther, ask them if you can send it to them. Obviously this costs money so you can accept some reimbursement if you want. If they don’t offer, ask politely for this or just dont bother. A couple bucks can go a long way to help #growthesport.

In order to do this, get their address. Then head to the post office.

Put the disc in a mailer.

Send it off! Simple and easy.

Just try to make a good effort in attempting to return a disc. If someone wants their disc back, they will go out of their way to help you return it to them.

Before we start wrapping up this post, I just want to quickly talk about disc golf karma. I mean, it’s real y’all. We all know about regular karma. You do something good and good will happen to you. You do something bad and, well, you get the idea. Up to this point, I’ve experienced this multiple times now on the disc golf course.

I decided early on that I was going to do everything in my power to #growthesport. And one of those ways is by making sure to always return lost discs if I was able to (you know, those with contact info on them).

Later in the year, I ended up finding a pretty tattered Discraft Thrasher near where I work. At first, I wasn’t going to give it back. But I decided that even though it was quite used, I was going to still try to get it back to the owner. I called him and he was pumped that I found it. He told me it was his favorite disc and he was so upset that he lost it. I went out of my way to ship it to him, just asking that he do the same when he was to find a disc in the future. A few weeks later, I found a really awesome looking Discraft Thrasher just laying on top of a basket. It looked almost brand new and it had no information on it. Now that’s awesome!

How to not lose your own discs

So now that we’ve been through the entire charade of finding discs and doing the best we can to return them to their owner, I’ll hit you with a little bit of knowledge on how to not lose your own discs when you’re out on the course. Here are five quick tips to avoid losing your own discs on the course.

1. Mark all of your discs: if your disc gets lost, this is one of the best ways to have someone return it to you. If you’ve searched and exhausted every other possible option, at least your disc will be marked and hopefully an admirable disc golfer will find it. 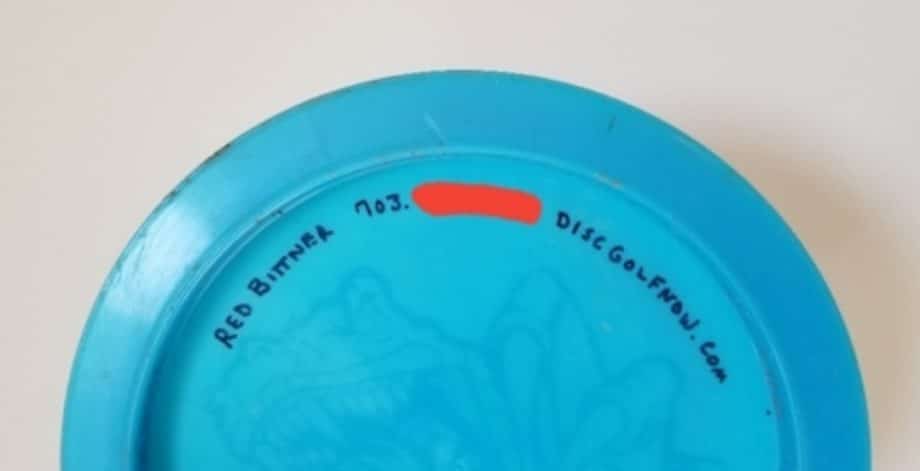 2. Throw bright colored discs: the best way to not lose discs before you throw them is play with bright, colorful discs that stand out from the rest of the colors around. Bright colored discs don’t get lost easily.

3. Avoid natural colored discs: stay away from discs that are brown, green, tan, black, or any other colors that are similar to the colors around you on the course. Natural color discs get lost easily.

4. Throw the right discs: if you’re a beginner or amateur player, be sure to play with discs in your skill level range. Advanced discs are hard to throw and be accurate with. You won’t be able to throw these very well, so they can get easily lost. Check out our list of the “37 Best Disc Golf Discs for Beginners.”

5. Play with friends: this guarantees that you always have an extra set of eyes trailing the disc from release. If you can figure out the general area where the disc landed, you will probably be able to find it.

If you would like a fantastic guide to help you find and not lose your discs, check out our awesome reference post called, “The Beginners Guide to Finding Lost Disc Golf Discs,” here on the site.

When it’s all said and done, all it takes is a little bit of common sense and some kindness. I know that might sound too cliche for you, but understanding what you have to do after you find someone’s disc is important. If you’re able to return a lost disc, you should always do it. It’s just one easy way that we as disc golfers can build relationships with one another and truly #growthesport. So make sure you do everything you can to make that happen! Alright, thanks for reading, disc golfers. Now get out there and go throw!

If you would like to read some more great content, check out some of our posts below!

link to 11 Best Disc Golf Discs for Backhand Throwers in 2021: The Backhand Champ is...

After your read, check out our similar post on the 11 best disc golf discs for forehand throwers here on the site! The backhand disc golf throw is tough. It's one of the first throws you'll...

Disc golf in the wind can be one of the toughest rounds you will ever play. But it can also be fun and pretty interesting as well, especially when you're trying to battle through the wind and the...