Back when I first started playing disc golf, I learned about fade almost immediately. I stepped up to the tee box, threw my disc, and the fade hit my disc like a baseball player hitting a homerun.

You see, back then, I didn’t know what fade was. I thought I was just ridiculously bad at disc golf. And yes, that was part of it.

But the part that was holding me back was not knowing the flight ratings like what fade was and playing with discs that were way out of my skill level.

I started out with a control driver that required too much speed, didn’t have enough turn, and had way too much fade. When it was all said and done, that disc was too tough and it constantly let me know.

Then I finally learned why I was playing poorly. I also learned about disc selection and fade. That’s when I starter to get better.

So today, we’re going to be breaking down FADE, looking at what it is, how other flight ratings can affect it, how fade can affect beginners, 3 ways to get more fade, and 5 discs that are great for fade. Alright, let’s get to it!

What is Fade in disc golf?

Low-speed fade is a natural characteristic of the disc to turn left (with a rhbh thrower) as the disc slows down. This fade will happen at the end of the flight as the disc is losing speed. Fade ranges from 0 to 5 and the higher the number, the more the disc will fade. 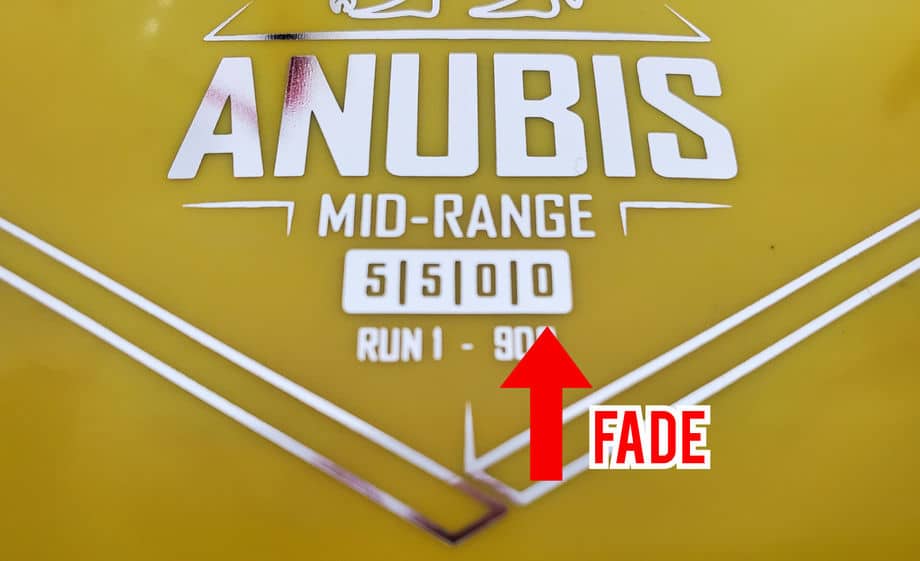 The flight ratings – do they affect Fade?

So as you may know, there are four different flight ratings. The answer to “do they affect fade?” is yes and no. Here’s why:

Speed is how fast a disc must be thrown to fly correctly. We learned in the flight ratings post about speed that if the disc is not thrown up to speed, it will not fly according to any of the other flight ratings. If the disc is thrown too slow, the disc may fade way too much! This is a huge problem for beginners… see why below in the beginners and fade section ⬇️.

Glide is how long a disc can fly through the air. So depending on how long the disc stays in the air, the disc could fade more or less.

Turn is how much a disc turns to the right (rhbh thrower) when first thrown. Turn doesn’t really affect fade.

Fade is how much a disc fades to the left at the end of flight (rhbh thrower).

Turn and fade are pretty much opposites. With a rhbh thrower, high-speed turn is how much a disc turns to the right at the beginning of flight. Low-speed fade then kicks in and is how much the disc fades to the left at the end of flight.

It’s simple – one turns right – the other fades left (for rhbh) or vice versa.

Turn mostly decides the stability of the disc, while you’re always going to have fade on the end of flight that can also affect stability somewhat. If you have a lot of fade, this can make your disc more overstable.

Why? Well, a disc will always naturally fade at the end of flight. That will happen with every single disc ever. It’s a natural part of disc flight. At the end of flight, the disc fades. So, as a beginner, you always want to limit fade as much as possible because discs will fade way too much for you as a beginner.

Fade, also called low-speed fade, happens when a disc is thrown slow or slows down. If a new person has a disc that requires too much speed and has some fade on the end, that disc will fade way too much. Those discs are probably too overstable and are bad for new players because they won’t be able to throw the disc straight. Too much fade will just immediately pull the disc into that fade.

That’s why I tell new players to get discs with a lot of turn and not a lot of fade. This will make the disc understable, which is good for new players. The disc will stay straighter, turn a little bit for you, and fade ever so slightly on the end of flight. This will allow you to actually be able to throw your disc straighter and farther and be able to play disc golf (instead of you disc coming out of your hand and breaking hard in one direction because of fade).

Again, if you’re new, don’t buy a disc with a lot of fade.

3 ways to get more fade on your throws

Before I even get into these recommendations, I just want to say that these discs are for intermediate to advanced players. So if you’re new, I do not recommend these discs. If you’ve played some rounds, have a fair grasp on the game, and can throw a disc decently fast and straight, then you can probably start getting into these discs. If that’s you, check out the discs below. If you’re brand new, check out our beginner discs post here.

I really like the Harp. It’s known as a mid-range putter, which gives you a ton of options when using it. The great thing, though, about it is that it’s really easy to throw. So it does have a bit of fade, but it feels great whether it’s used for throwing, approaching, or putting. Grab one here on InfiniteDiscs.com.

The Roc is one of the most popular mid-range discs in the game today. It’s easy to throw, ridiculously reliable, will fly on any line you put it on, and is just built for intermediate to advanced players.

Here’s what Innova says about the Roc:

“The Roc is simply the best, most versatile mid-range disc ever made. It provides accuracy at any range. This disc can take and hold the angle of release, even into a headwind. It can be used for driving, upshots, straight shots, hyzer shots or anhyzers. The Roc ages gradually and predictably. If you’re not sure what disc to throw, choose the Roc.”

The Felon is a fantastic, super overstable disc from Dynamic that is a tried and true “meathook.” If you don’t know what that means, the Felon has a ton of fade and will break really hard on the end of flight, with flight similar to what a hook looks like.

Here’s what Dynamic has to say about it:

“The Felon is the wind-fighting fairway driver that your bag is calling for. It will continue to sail, without turning over, despite that headwind. When the wind is down, it has an incredibly predictable hyzer finish. When you are facing a low ceiling shot where you need good glide and a strong finish the Felon is your answer.”

The Zeus, originally introduced as the Kong, was one of the hottest new releases of 2019. This disc may seem pretty overstable, but flies incredible straight if you throw it fast enough. It has just a touch of turn before it hooks around in the end. This disc can really get you the distance if you put a little bit on it. Grab one here on InfiniteDiscs.com.

Fade is extremely important. From the moment you step onto a disc golf course, your disc selection and knowledge of flight ratings can make or break your game. As you grow and learn the game, you’ll start to understand how disc flight is affected by different things like fade and you’ll get better at controlling your discs.

Eventually you’ll get discs with less turn and more fade. You’ll improve and you will soon be able to use flight ratings like fade to shape maneuver your shots on the course.

So hopefully you learned something in this post. All of the disc golf flight ratings are important, but if you don’t know fade, you can kiss your chances of getting better goodbye.

Looking for more information on flight ratings? Check out our posts below!

Disc Golf Flight Ratings: What is Speed in Disc Golf?

Disc Golf Flight Ratings: What is Glide in Disc Golf?

Disc Golf Flight Ratings: What is Turn in Disc Golf?

Also be sure to smash those share buttons below!