Speed. It’s what us disc golfers love to talk about and really what we strive to get on our throws.

But there’s more to this speed thing than you may realize. From arm speed to disc speed to the fastest speed a disc has ever gone, seriously, speed is one topic that I could probably write about 10 different posts about.

But today, we’re going to go over disc speed in relation to a disc’s flight ratings, what exactly it is in disc golf, one huge common misconception of speed, why disc speed matters, and 5 ways to help get your discs up to speed out on the course.

What is speed in disc golf?

Speed is the first flight rating on every disc and is how fast the disc must be going in order to fly correctly. The “faster” a disc is, the more speed, power, and spin has to be behind it for it to fly according to the rest of the disc’s flight ratings. Speed ranges from 1 to 15. 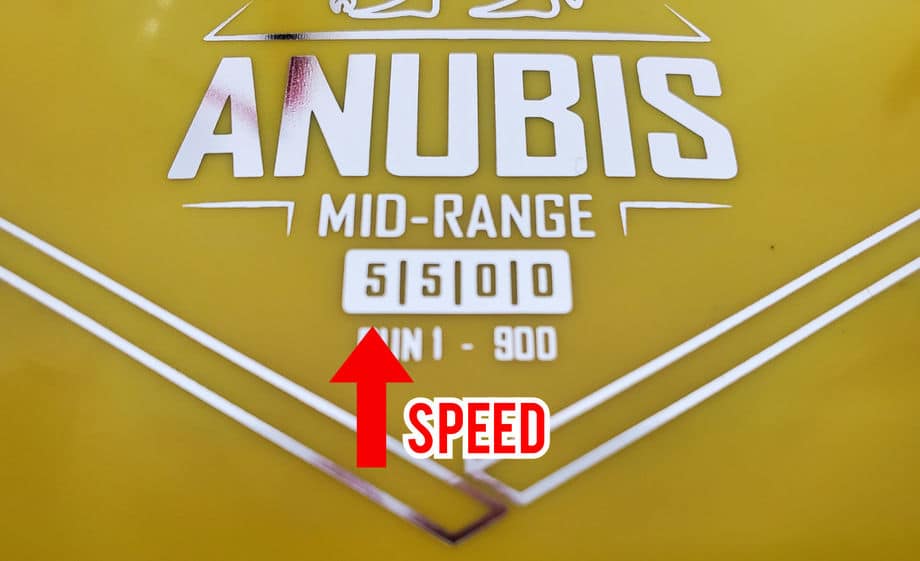 There’s a HUGE misconception when it comes to speed in disc golf. A lot of players believe that the first flight rating, or the speed of the disc, shows you how fast that particular disc will fly. That’s not actually correct. The speed is how fast a disc must be thrown in order to fly the way it’s supposed to fly. The higher the number, the faster the disc needs to be thrown.

I will say, though, that the first flight rating indicating how fast a disc will go can be partially correct if the thrower throws the disc as hard as it’s supposed to go.

If the disc is thrown hard enough, it can fly faster if the speed flight rating is higher.

BUT just remember that the first flight rating represents how fast a disc must be thrown to fly correctly according to it’s flight ratings.

Disc speed matters because each disc is supposed to fly a certain way. Each disc has a series of four numbers called flight ratings that allow the disc to have it’s own “personality.”

Speed is the first flight rating. Speed is how hard the disc must be thrown.

The second flight rating is glide. Glide represents how long a disc can glide through the air.

The third flight rating is called high-speed turn. Turn is how much a disc turns to the right (with a right hand back hand thrower – rhbh) when first thrown or at the beginning of flight.

The fourth flight rating is called low-speed fade. Fade is how much the disc fades to the left (rhbh thrower) at the end of flight.

So that’s just a quick overview, but explains what each flight rating does to the disc while it flies. But in order for the disc to fly the way it’s supposed to, it has to be thrown at the correct speed. If you don’t throw it up to speed, the disc will not fly correctly. This makes speed the most important flight rating factor. Speed determines the rest.

“As a general rule of thumb, the higher the speed or first flight rating number is on a disc, the harder it is to throw.”

3 ways to get your discs up to speed

In this section, I’ve put a couple of really simple, yet really effective tips to increase your arm speed and your disc speed. These tips are meant for beginners.

Learning and understanding disc golf throwing technique is one of the most important tips that I can give you. Over time, proper form and technique will allow you to absolutely sling your discs.

Check out our post, “7 Steps to the Best Disc Golf Technique and a Perfect Throw,” to learn more about technique.

2. Throw discs at your skill level

As you start working on throwing discs faster, you need to start out with lower speed discs and work your way up. If you stick to these discs, you’ll improve and soon be able to throw faster discs faster. If you throw discs that are too tough, you just won’t improve.

One way to do this is to disc down, or go down in disc to a mid-range or putter. Discing down allows you to throw easy discs and learn the game. As you get better, you can go back up to tougher, faster discs.

Check out our post, “37 Best Disc Golf Discs for Beginners (You Need These),” to find some good beginner discs to play with.

As much as you don’t want to hear this, you need to be patient and allow yourself to get better over time. You won’t get better in just a couple of rounds. Disc golf takes months of practice before you eventually get better. So practice up and be patient.

Check out, “11 Ways Patience Will Help You Win in Disc Golf,” for more.

Speed is really important in disc golf. And when it comes to disc speed, being able to get some power and spin behind your disc usually means the difference in whether your disc will fly correctly or not. But don’t worry too much about speed. Just practice up, keep learning, and you’ll soon get speed behind all your throws.

Hopefully you’ve been able to learn something today. Thanks for reading, disc golfers!

Before you go, grab a copy of the best beginner book on the planet, “The Disc Golf Player’s Manual.” This ebook is packed with 200+ pages of the best info available to new disc golfers. So don’t miss out!

Also be sure to smash those share buttons below!