A couple of years ago, I knew absolutely nothing about disc golf. But the first time I played, I instantly loved it.

It was just so much fun, but the challenge was really there. And there was so much to learn.

I got better and better, but the real improvement came when I finally learned about flight ratings. There are four of them – speed, glide, turn, and fade.

Today, we’re going to be breaking down TURN, looking at what it is, how other flight ratings can affect it, why beginners need more turn, 3 ways to get more turn, and 5 discs that are great for turn. Without further ado, let’s get into it.

What is turn in disc golf?

High speed turn is a flight characteristic of a disc and is how much a disc turns to the right (for RHBH thrower) during the fastest part of its flight. The degree to which a disc resists high speed turn determines the disc’s stability. It’s also the third flight rating in the flight ratings system and ranges from -5 to 1. 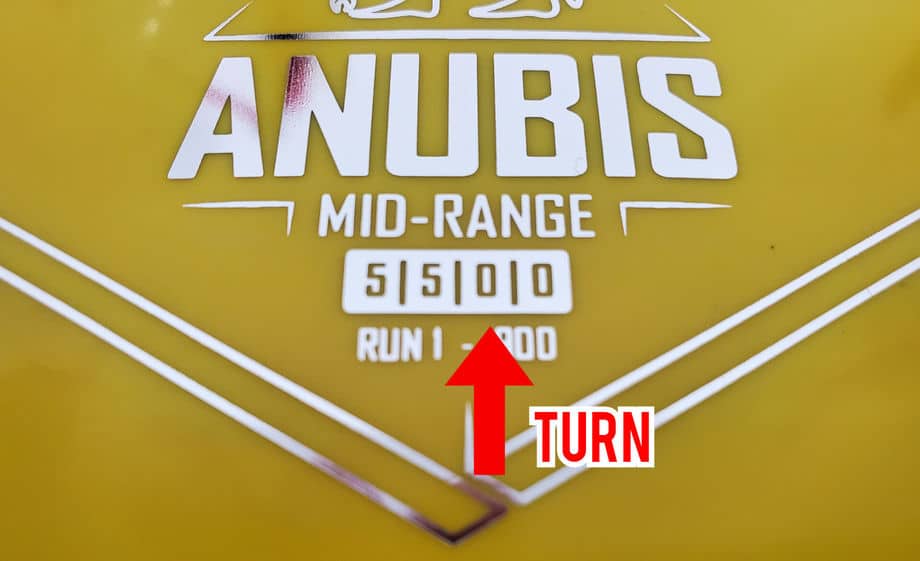 The flight ratings – can they affect turn?

Speed is how fast a disc must be thrown to fly correctly. We learned in our flight ratings post about speed that if the disc is not thrown up to speed, it will not fly according to any of the other flight ratings. So your disc may not turn as much if you throw your disc too slow.

Glide is how long a disc can fly through the air. So depending on how long the disc stays in the air, the disc could turn more or less.

Turn is how much a disc turns to the right (rhbh thrower) when first thrown.

Fade is how much a disc fades to the left at the end of flight. Now fade doesn’t really have a lot of impact on the disc if there’s a decent amount of turn on it. Fade is more or less of what happens at the end of a disc’s flight.

Turn and fade are pretty much opposites. With a rhbh thrower, high-speed turn is how much a disc turns to the right at the beginning of flight. Low-speed fade then kicks in and is how much the disc fades to the left at the end of flight.

It’s simple – one turns right – the other fades left (for rhbh).

Turn mostly decides the stability of the disc, while you’re always going to have fade on the end of flight that can also affect stability somewhat.

High-speed turn is a beginner’s best friend. If you’re a new player, you will want to know all about the flight ratings, but specifically, high-speed turn.

As a new player, you want understable discs. You’re looking for simple-to-throw discs that will easily turn to the right after being thrown. Discs that help you keep the disc a little straighter and help you get a bit more distance before it finally starts slowing down and fading to the left and to the ground. So you want discs with more turn, or those that are understable, to help you throw.

You also want to look at fade. Discs will always fade at the end – it’s what they do. But you want to also try to find discs that have less fade. Less fade means the disc can stay just a bit straighter at the end. Some discs, when slowing down, can hook hard to the left when they fade. You don’t want that. Like I said, DISCS WILL ALWAYS FADE. But you can pick out discs with a lot of turn and not a lot of fade. Our selections below can help you with that.

3 ways to get more turn on your throws

If you’re looking for some ways to get more turn on your throws, we’ve got you covered. And it’s really easy!

1. Discs with more turn and less fade: the first step is to buy some discs that are already made this way. We’ve got some recommendations below, but looking for discs with -2 to -4 turn and 1 or less fade are ideal. Those will give you the best chance if you’re a newer player. Those discs are “understable,” as stated earlier.

2. Throw faster: the faster you throw, and the faster the disc spins, normally means that the disc will turn more for you. Don’t throw so hard that you sacrifice good form, but if you can get some “oomph” behind your throws, you’ll get a bit more turn out of that disc.

The Latitude 64 Ruby is one of the ultimate beginner disc golf discs. With it’s slow speed, great glide, high amount of high-speed turn, and low fade, the Ruby is great for new players to immediately take the course and start learning. It’s also a part of Latitude 64’s “easy to use” disc golf line. I mean, if you want to start out with something simple, this disc is it. Grab one here on InfiniteDiscs.com.Grab one here on InfiniteDiscs.com.

This unique mid-range putter is kind of a hybrid disc that offers a lot of adaptability out on the course. Whether you’re looking for a putter, a mid-range approach disc, both of those, or something that you as a new player can drive with off the tee, you’ll find all of those in this one disc. The Wedge can be an amazing complement to your bag. Get one here on InfiniteDiscs.com.Get one here on InfiniteDiscs.com.

I’m a huge fan of the Comet. It’s been a really popular disc for a long time. The Comet is a very large disc golf disc compared to other discs and is a great starter mid-range for those who haven’t really played before but have thrown a regular frisbee. It’s also a good starter disc for Ultimate Frisbee players.

The Comet is also a really easy disc to throw, with only a 4 speed and great glide with a rating of 5. On top of that, it has a -2 turn rating, which is moderate but will turn a bit for you when first thrown. Overall, it’s just a great disc and will continue to help players do well on the course. Get a Comet here on InfiniteDiscs.com.Get a Comet here on InfiniteDiscs.com.

The Panther is a really awesome mid-range that comes in Innova’s Champion plastic starter set. I personally like the Panther because of how stupidly versatile it is on almost any shot you take with it.

Once you’re able to handle drivers, there are a bunch of great drivers with considerable turn that will help you improve even more. One of those great understable selections is the Westside Discs Underworld.

All in all, turn is a pretty simple concept. With a lot of turn, the disc will turn in the direction of the arm you throw backhand with (rhbh turns right – lhbh turns left). Easy, right?

But make sure you understand turn in its entirety because your disc’s flight depends on it. And if you want to get good at disc golf, you need to be throwing the right discs with the right amount of turn for your skill level.

For more on disc golf flight ratings, check out the posts below.

Disc Golf Flight Ratings: What is Speed in Disc Golf?

Disc Golf Flight Ratings: What is Glide in Disc Golf?

Also, be sure to smash those share buttons below!