After your read, check out our similar post on the 11 best discs for backhand throwers here on the site!

Forehand is tough. We all learn backhand at first and nail down that technique pretty fast. But forehand is a whole different animal.

The forehand shot, or the “flick,” requires more patience, dedication, and determination to perfect than just about any other shot in disc golf. It’s hard. And I haven’t been able to really throw it well to date yet…but I’m learning.

That’s why you won’t see much on my site regarding forehand shots from 2017-2020. I’m just not that great at these forehand shots so I don’t write a lot about them. I mean, why would I try to teach something I’m not good at? But again, I’m learning so I’ll try.

This post is simply a few things that I’ve picked up along the way including:

First of all, what is disc golf forehand?

Disc golf forehand, or the disc golf “flick,” is when a player throws their disc with a sidearm throwing motion in a similar motion to how a sidearm baseball pitcher would throw a baseball. The disc does does not come across the body like a disc golf backhand throw and is basically the opposite of a traditional frisbee throw.

You can check this out throwing motion in the pic below. 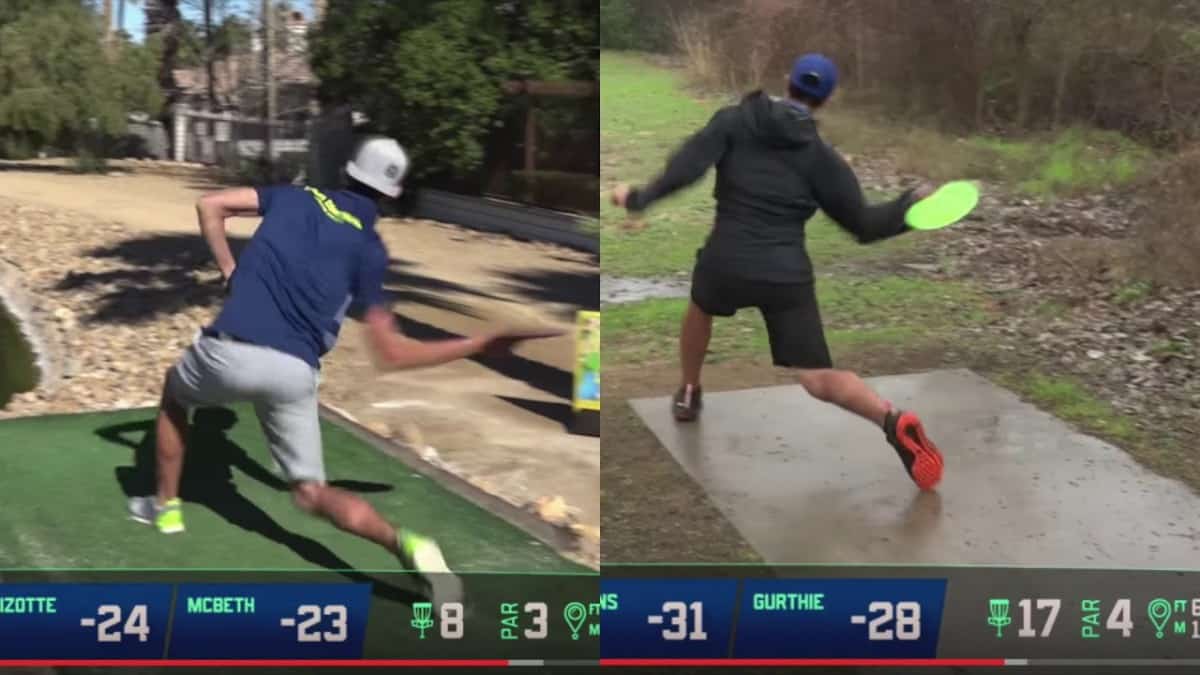 But you’ve probably already seen this and/or you’re just looking for discs so let’s move on.

What makes a good forehand disc

I’m going to assume that you’re somewhat new to forehand like I am and so you’ll probably not be all that great at throwing forehand shots right along side me. Hey, congrats! We’ll both improve day by day so don’t you worry!

If you are relatively new to forehand, you’re going to want to go back to the basics when it comes to learning how to throw a disc. So what was that? Remember? Low speed, easy, understable discs that can help you practice and learn. You can really pick up almost any beginner putter/mid-range and learn but you want those easy to throw discs at first just like when you were brand new.

Low speed means that they don’t need to be thrown very hard to fly correctly. And understable discs are better for newer players because they will fly straighter for longer before fading at the end (if they fade at all). So start with those if you’re brand new to throwing forehand. Those are the discs that I still practice with – low speed, understable discs.

The thrower and his opinion

You can see that starting out by throwing low speed, understable discs can be important. But really, it’s up to you and your preference. I think you should throw whatever discs you feel fits your forehand style the best. If that’s a higher speed or a more overstable disc, go for it. If you get better results with control drivers, hey, it’s all you. Whatever helps you throw forehand the best is what you should throw. But if you’re still working on your forehand, here are a couple of tips to help you improve your forehand game ⬇️.

How to improve your disc golf forehand

So like I’ve already said, I’m by no means skilled at throwing forehand “flick” shots. But I have improved a little bit since I started practicing. And these are 3 tips that have really helped me so up to this point.

1. Field work, net practice, and repetition: if you read any of my tips posts on this site, I’m gonna tell you to practice and practice a lot. But you’re never gonna be a great forehand thrower if you don’t get into a field and practice A LOT. You can also get a practice net like I did (grab this one here on Amazon).

I would also start with shorter approach shots and work your way up into bigger, longer shots and drives.

2. Grip: alright, I’ll tell you what I know. Grip is SUPER important and can really screw up the rest of your shot if you don’t get it right. First, you want to make sure just two fingers (your index and middle finger) are on the inside of the rim. Your ring finger and pinky finger should be bent in toward you. Thumb on top of the disc. Second, you need to tuck the disc back deep in the webbing of your hand. This helps to provide more control. Third, you want a really firm grip. The more you practice your throw with this good, deep grip, the less “flutter” you will get resulting in a less wobbly disc. Grip matters. So work on your forehand grip in order to improve your throws.

3. Technique: obviously technique is important, too. First, you want your wrist back into full extension. This will ensure that you get the entire range of motion with the wrist driving the momentum of the disc forward. You’re going to want to concentrate on rolling or pushing the disc off that middle finger during the release to increase the spin and rotation of the disc. That is the key contact point when throwing forehand. Lastly, lead with your elbow and extend forward to follow through to throw the disc. Keep working on those couple of things to really start crushing your forehand game.

For more, watch the pros

Just simply watching the pros or better players give tips on their forehand game was a huge benefit to my own personal forehand game.

The 11 best discs for forehand throwers

The Buzzz is hands down one of the best discs ever made for disc golf. Period. But aside from it just being a great disc, it’s a perfect starter/practice disc for learning and throwing forehand shots. The Buzzz is great for all kinds of shots but is super reliable and will fly on any line you throw it on. So grab one for your forehands here on InfiniteDiscs.com.

2. Discraft Zone (Putt and Approach) – #1 pick of the #discgolfcommunity

Even though the Buzzz was my #1 overall pick for best forehand disc, the Zone is, by far, the most popular forehand disc in the #discgolfcommunity. Everywhere I turned for recommendations I found myself in a forum post or message board with the Zone as a top recommendation among discs for newer forehand throwers. I found that I liked the Buzzz better personally. But I’ll leave that choice up to you. If you want to try the Discraft Zone, grab one here on InfiniteDiscs.com.

The Anubis is one of the straightest discs I think I’ve ever thrown at 5, 5, 0, 0. It is a perfect starter mid-range for learning forehand and just an awesome overall disc from the Infinite Discs line. I highly recommend this disc overall AND if you want to start really upping your forehand game. Grab one here on InfiniteDiscs.com.

The Truth is an awesome disc. Less stable than the EMac Truth but better in my opinion and makes a helluva forehand disc! Grab one here on InfiniteDiscs.com.

The Harp is hands down one of my all-time favorite discs. Why? Because it’s an awesome crossover disc that’s actually labeled as a crossover “mid-range putter” AND flies REALLY well for me. As for your forehands, you can expect the same great flight with predictable ending fade. If that’s what you’re looking for, grab yours here on InfiniteDiscs.com.

The Teebird has been an extremely popular disc golf disc in the #discgolfcommunity for years now and has been the forehand of choice for a bunch of players. This disc is consistent, dependable, and reliable in all situations especially on the forehand. Grab yours here on InfiniteDiscs.com.

The Leopard is an amazing control driver. It is the best transitioning control driver, in my opinion, for newer players moving up in disc and I think can be just the same for those players moving up in disc for forehand throwing. This disc is great in really any situation you need it in but it can seriously help you amp up your forehand game. Get yours here on InfiniteDiscs.com.

This “power driver” has the potential to be your go-to workhorse forehand driver off the tee. It skirts the line between control and distance driver and can really get you some distance (300+ feet if you get some power behind it). If you want a really consistent and controllable disc, grab a PD here on InfiniteDiscs.com.

The Tesla is a borderline power-distance driver built really well by Maple Valley Plastics. I’ve always been a fan of them and the Tesla has been a highlight among their brand. The Tesla is thrown best for long-range, pin-point accuracy, especially with your forehand. This disc can really bomb. Grab one here on InfiniteDiscs.com.

The Innova Destroyer has been a fantastic forehand disc for years now. Tons of players in the #discgolfcommunity use this disc as the go-to forehand disc in their bag and for good reason. It’s versatile and flies freaking far.

Infinite Discs states that, “for less experienced players, the Destroyer excels for forehand throws. The Destroyer is overstable, but has a degree of turn to help provide incredible glide and distance. Intermediate players will get more distance on forehand throws with the Destroyer than just about any other disc.”

Grab a Destroyer here on InfiniteDiscs.com.

I’m a huge fan, overall, of the Infinite Discs Pharaoh. It’s been a phenominal disc from Infinite Discs (honestly, one of my favorites from the brand so far) and is very similar to the Innova Destroyer or Discraft Zeus. For forehands, I would NOT recommend this for beginners but would definitely recommend it for those looking for overstable beast drivers that can really fly and will fade pretty good at the end of flight. Grab yours here on InfiniteDiscs.com.

It’s honestly up to you, though

I would start practicing forehand with a bunch of discs and just find the ones you like the best. When it comes to forehand throwing, almost every single person is different. So get out and find your disc!

27 Best Disc Golf Bags (Yes, You Need One of These)

17 Best Disc Golf Baskets (Get One and Win)

Don’t forget about the book!

You can also grab a copy of our book, “The Disc Golf Player’s Manual,” here on the site. It’s packed full of extremely practical tips and tricks to help you immediately start improving on the course!