The Thumber and the Tomahawk: two somewhat similar, yet very different shots in disc golf. They’re intriguing, have a crazy flight, and can help us get out of some of the toughest spots on the course, but most disc golfers barely use them.

Why is that? Well, they’re just not that popular. But I love these shots and I use them as often as possible. But I still don’t prefer them over them over the traditional backhand or forehand shots. I guess that’s just where they stand.

Even so, the overhand shot can be an absolute lifesaver and is a hugely underrated shot. Most don’t even pay this shot any mind, but if you’re reading this post, clearly you use this shot.

So in this post, we’re going to look at a couple of different things regarding the overhand shot:

What to look for in a good overhand disc

There are a couple of things you need to look for in a good tomahawk disc. Now a thumber and a  tomahawk are essentially the same shot, just on completely opposite flight paths and with different fingers (thumber uses thumb then curves left and curves right/tomahawk uses pointer and middle finger then curves right and curves left – one is just the exact opposite if the other). So with that being said, you want:

Pretty much the only real requirement for a Thumber/Tomahawk disc is an overstable disc. Stability itself is how a disc immediately flies after it is released from the throwers hand straight and flat. Now we know that with thumbers and tomahawks, they are not released straight and flat. With that, we’ve got to know how stability affects a disc that’s flying up in the air and upside down through its flight.

Overstable is when the disc has to be thrown at a higher speed in order for a disc to follow it’s intended flight path before fading to the left (for right-handed backhand throwers).

Okay so why overstable for overhand throws? Well, when a disc is thrown as a thumber or a tomahawk, the disc flies up into the air and starts to flip over, with its flight plate (top of the disc) facing the ground. You want overstable discs because they will turn less slowly after being released and have the ability to fly farther in the air.

After you throw the disc up in the air on a thumber, you want the most stability so that your disc will resist turning over too fast.

With a thumber, your disc will turn over quicker regardless, so you want the most overstable discs with a thumber.

With a tomahawk, you want discs that are a little bit less overstable because the disc isn’t going to turn over too fast (or as fast as a thumber throw).

So for thumbers, first off, very overstable. For tomahawks, stable to overstable discs are fine.

Speed of a disc is the other factor that you need to look at. Speed, in regards to throwing overhand shots, is pretty straightforward. The faster a disc’s speed is, the faster it’s going to flip over. So depending on which shot you’re using is what kind of speed you want for your disc.

So for tomahawks, you want a faster, overstable disc.

For thumbers, you want a slower, very overstable stable disc.

Discs that fly well/work for you

Obviously there are no really written-in-stone rules for overhand throws. But the first two are just general rules to follow because of how stability and speed affect the disc. I would just test out your discs and see which discs work best for you.

Best for: thumbers (world record throw was a thumber)

This disc is pretty much going to be the king of overhand thumber throws. It is by far one of the most overstable discs on the market (if not THE MOST overstable disc) and does not hardly turn at all. This disc was designed by Discmania (with the input of disc golf pro Simon Lizotte) to be “Simon’s dream disc.” Basically, Simon wanted a ridiculously overstable disc and this is it.

As for the flight ratings, it has a 9 speed, so slower on our overhand scale making it better in the thumber category. Almost no glide, the least amount of turn possible at 1 and a 6 fade rating! This disc is going to be a ridiculous disc for huge flex shots (anhyzer release with an overstable disc) but I honestly believe that Simon wanted this disc for overhand thumber shots. Who knows, maybe he likes flex shots or he thinks he can handle this disc. Whatever he wanted, it’s an overstable plastic beast. If you can find one, get it for thumbers.

World record update: as of September 23rd, 2021, disc golfer Seth Day used this disc to break the “upside down” distance record with a ridiculous throw of 176.6 meters or 579.6 feet. This is almost 100 feet farther than the previous record of 142.2 meters or 482 feet 11 inches. You can see Seth Day’s world record upside down throw in the video below ⬇️:

You may have to find it on EBay because they’re hard to get. Or you can check back here on InfiniteDiscs.com or here on Amazon.

Best for: better for thumbers (or tomahawks) – broke the world distance record as a tomahawk throw in 2014.

The reason I put the Tilt at the top is because it’s not really my #1 pick just yet. More along the lines of this disc COULD be awesome but I haven’t been able to try it out yet because of limited supply and price.  Note: the Tilt currently holds the upside down distance record so it’s gotta be an awesome disc.

The DGA Hellfire is the next disc on this awesome list and it’s a doozy. The Hellfire is a hugely overstable control driver and one of the most overstable drivers in disc golf today. Before the Tilt, not many discs could say that they had so much meathook potential. I mean, this disc makes normal overstable discs look like understable beginner discs.

If you want a great overhand disc, grab the Hellfire here on InfiniteDiscs.com.

Best for: either shot

If you want to try out the Firebird, get yours here on InfiniteDiscs.com.

The Nuke OS is a beast. No, wait, it’s a Nuke OS from Discraft. Seriously, though, this disc is tough. It’s VERY fast and VERY overstable. Not quite as overstable as the first two discs, but enough to do the job as a proper tomahawk disc.

I haven’t been able to test out the Nuke OS for overhands just yet, but here is an awesome review of it on InfiniteDiscs.com: “I use it primarily for thumber (overhand) shots. That being said, I can throw the Nuke OS about 250-265ft in the air using the thumber shot with great accuracy, and when it hits the ground, most times it rolls annother 20-30 ft. I highly reccomend anyone trying to develop an overhand shot to try the Nuke OS!”

That all sounds good to me. If you’d like to try out the Nuke OS, grab one here on InfiniteDiscs.com.

I’m a huge Dynamic Discs fan, and wouldn’t you know it, I like the Felon, too. But this disc is a meaty son of a gun. This meathook of a disc isn’t going to get you very far down the course before fading out on you.

If you’d like to try the Felon, grab one here on InfiniteDiscs.com.

The Scepter is a really interesting disc from the Infinite lineup. It’s a very overstable, decently fast control driver that’s perfect for the overhand throw.

Here’s what one reviewer said on InfiniteDiscs.com: “Similar to the Firebird in flight, this disc is excellent for forehand power throwers, sky high grenades, or thumbers and tomahawks.”

Check out the Scepter here on InfiniteDiscs.com.

As for overhand throws, this disc is perfect for tomahawks but I’m sure would do well with thumbers. It’s a little bit faster than most of the other discs on this list and less stable, so it can be a tomahawk thrower’s best friend out in the course. Overall, fantastic disc to have in your bag (and believe me, a lot of players do have this in their bag).

If you’d like a Destroyer, grab one here on InfiniteDiscs.com.

Other discs you can try out on the overhand throw

How to throw an overhand throw (the quick guide)

I really don’t like the Tomahawk throw as much as the Thumber. To me, it doesn’t feel very natural and never turns over as well. But I can see why some would like it. Normally, if I need a shot that finishes left, I’ll just throw a regular backhand or a bigger hyzer backhand. That almost always does the trick. I think I’ve only used the tomahawk once or twice with little success. 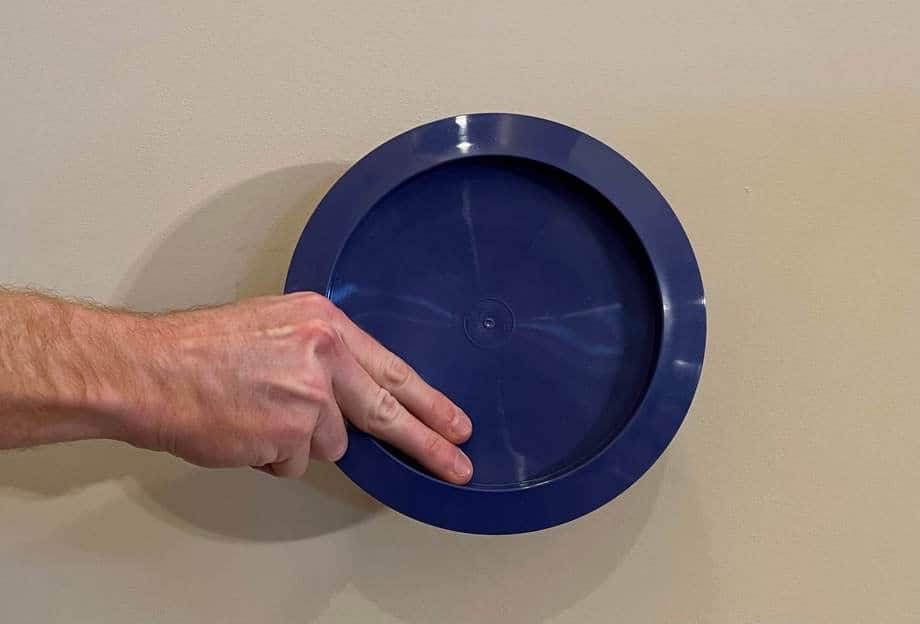 For right-handed throwers, the tomahawk comes out over the top of the throwers hand and up into the air. As the disc starts to turn and flip over, it will pan to the right at first, then will fly back to the left.

For more on how the tomahawk flies, check out the video in the section below ⬇️.

When it comes to both of these specialty shots, I personally like the thumber better. For me, the grip is more comfortable, the throwing motion is much more natural, it curves better for me, and I just like throwing it more. But that’s just me. You can choose your own favorite. 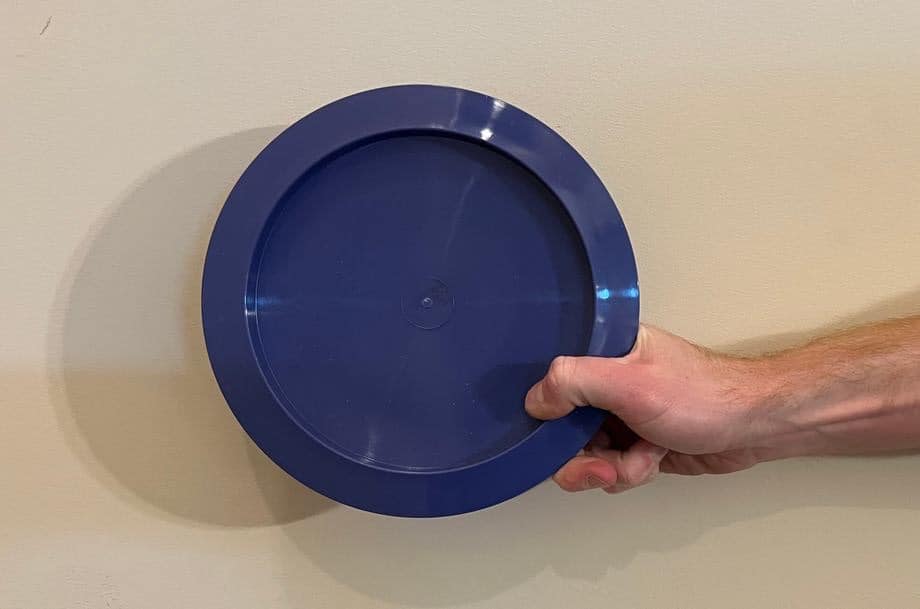 The thumber flies on the complete opposite trajectory as the tomahawk. You throw the disc overhead, it flies up, and as it starts to turn and flip over, it will pan to the left, and then back to the right.

For more on how these discs fly, check out the video below from JK Disc Golf ⬇️:

So that’s all of it

The overhand throw is awesome. But it’s so entirely underrated. Thumbers and tomahawks just don’t get used as much as they should. I use them sometimes, and now that I’ve really dug into the details of overhand throws, I’m definitely going to use them more in my rounds. Hopefully you will, too! Thanks for reading, disc golfers.

Before you go, don’t forget to check out the best beginner disc golf book on the planet, “The Disc Golf Player’s Manual.” This ebook is packed with over 200+ pages of the best tips, tricks, and advice for new players. This book is Epic. So don’t miss out!