The Hyzer Flip is, hands down, one of the coolest shots in all of disc golf. But it’s also a tough shot to master. You have to use a certain type of disc and put it on an angle that allows the disc to completely change the angle as it flies. I mean, it’s not easy. But once you perfect it, it’s really cool.

The Hyzer Flip is coveted. And It’s something that you can use in a variety of different situations to help you seriously amp up your game and improve your skills on the course.

In this post, we’re going to look at what exactly the Hyzer Flip is, the different situations you can use this unique throw in, what kind of discs you will need to throw the Hyzer Flip, how to throw it in 3 easy steps, and 3 of the best discs to use when throwing the Hyzer Flip.

Like I’ve said, the Hyzer Flip is awesome. So let’s learn how to throw it!

What is a Hyzer Flip in disc golf?

A Hyzer Flip is thrown using an understable disc on a hyzer angle of release. During flight, the disc “flips up,” or turns up to flat, bringing it’s nose down in the process, and allowing for the disc to glide long and straight at the end toward the basket.

The Hyzer Flip is similar to an S Shot but is thrown on a hyzer angle instead of thrown flat. The Hyzer Flip is different from the Flex Shot because you use an overstable disc and an anhyzer angle of release. However, all three throws fly on a relatively similar line. Today, though, we’re focused on the Hyzer Flip. 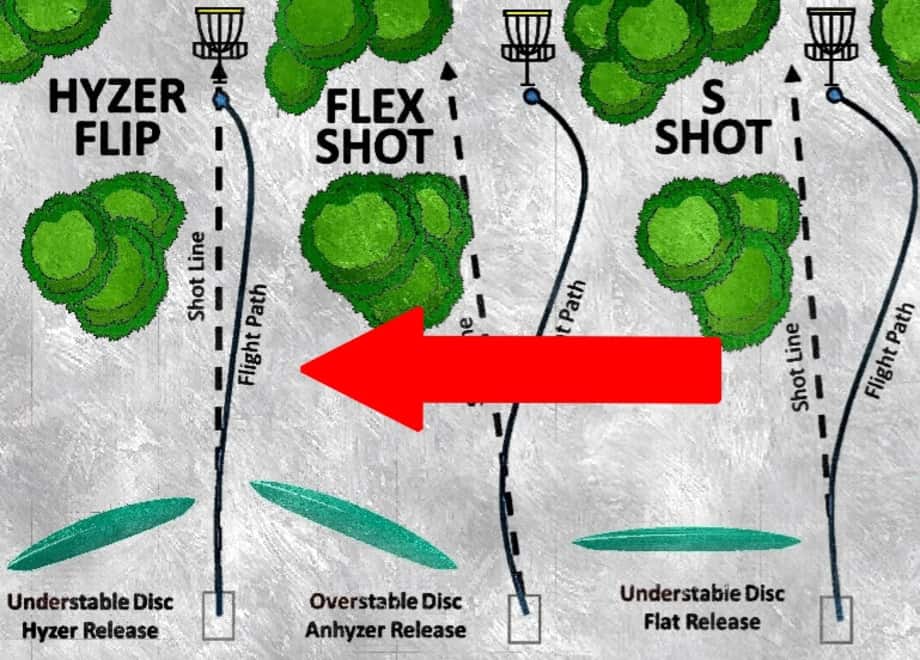 The three things you need for the Hyzer Flip

You can also watch Merle Witvoet’s video on hyzers and anhyzers below for a better understanding ⬇️.

The 2 different situations you would use a Hyzer Flip

1. Throwing your disc perfectly straight: a lot of the time, trying to throw a disc golf disc perfectly straight is often pretty difficult. Now if you’re a player that’s lucky enough to be able to throw your throws on a perfectly straight line 100% of the time, good for you. You may not need this throw. If you’re this person, go pro. But for the rest of us, including a lot of really good pro players, we use the hyzer flip to throw shots the mostly fly straight. After the hyzer angle and the turnover flip, your disc should fly nice and straight with a tiny bit of fade on the end. That makes the Hyzer Flip perfect for tightly wooded courses and tunnel shots.

2. When you want to throw a huge shot with a lot of room: a lot of pro players will take advantage of the hyzer flip, which has been the throw of choice for decades, in order to get maximum distance on a hole with a ton of room and a need to get maximum distance. The idea is to simply get a lot of force behind your understable disc and allow it to flip and turn over. This will allow for an incredible guided flight that will really get you an insane amount of distance. That makes the Hyzer Flip perfect for throws with room over water or for distance competitions.

How to throw a hyzer flip in 3 easy steps

So, as I’ve already said a couple of times, the Hyzer Flip is a fairly simply shot. Yes, you may need to practice it some to perfect it, but there’s not a lot to it and it only requires three steps to get it down.

Step 1 – Pick your disc: the first step is to find that understable, high glide disc. This is really all you need for step 1. If you need some recommendations, check the section below this one for my 3 best discs for Hyzer Flips. Here’s a sneak peak of what’s to come. 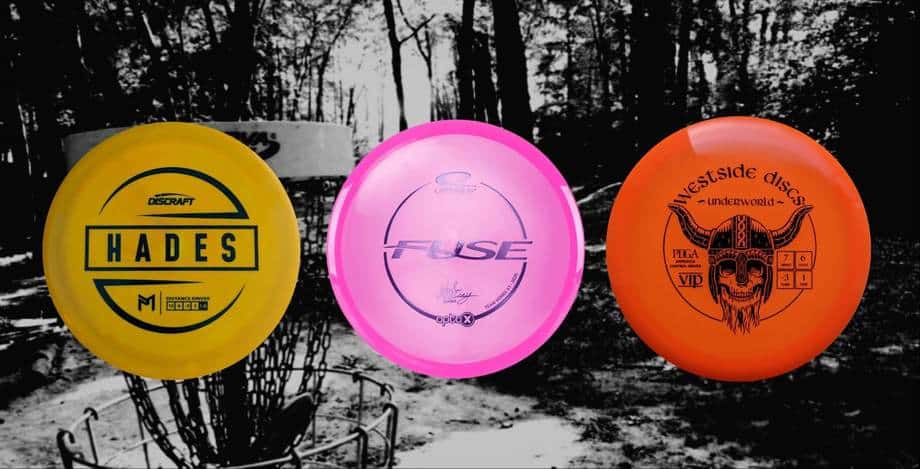 Step 2 – Use proper technique: just like every throw, you need to make sure you’re using proper disc golf throwing technique for your throw. If you’d like to learn more about this, check out my post, “7 Steps to the Best Disc Golf Technique and a Perfect Throw.”

You can also check out the pros driving in sequence, with proper disc golf technique, in the video below ⬇️.

Step 3 – Hyzer and follow through: the third and final step is to throw the disc on a hyzer line. Remember to angle the disc accordingly on a hyzer, using your understable disc, along with proper technique. Once all of that is in order, throw the disc with some power and the angle and the disc should do all of the work for you. 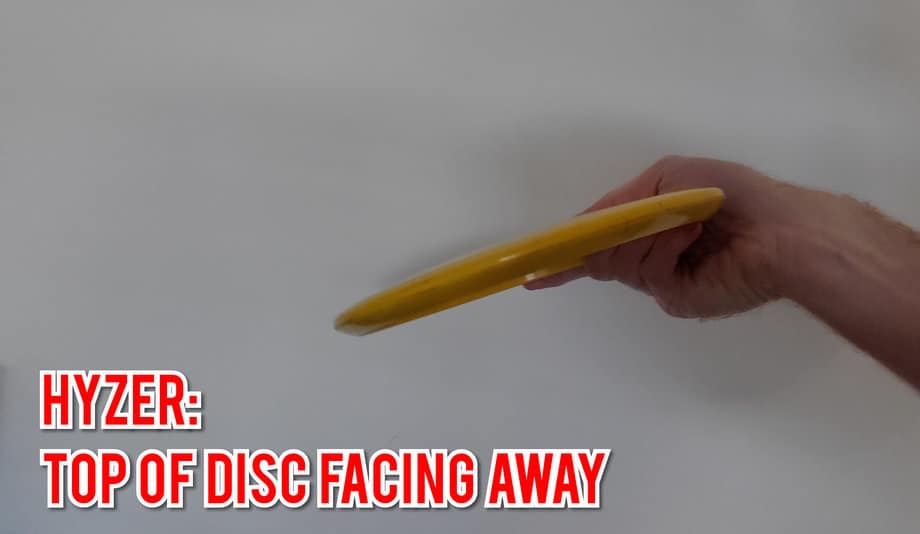 Again, check out that Hyzer Flip video from Fly Life on YouTube. It’s just a perfect example of how this shot should be executed. If you throw your Hyzer Flip like this, you’ve perfected it.

The Hades is one of the newest additions to the Paul McBeth lineup of Discraft discs…and it is a winner. I almost put the Discraft Avenger SS here but I’ve liked the Hades so far. Speaking for just this post, the Hades is an awesome Hyzer Flip disc. It does require a bit of power to get up to speed but if you’ve got the arm it will turn over VERY nicely and will glide for a long time. BUT be prepared for a bit of ending fade. This disc will give you a nice long flight and won’t break until the last minute but that fade is a bit more than you would want for a tunnel or an extremely straight shot. This is a disc for wide open Hyzer Flips. Grab a Hades here on InfiniteDiscs.com.

The Underworld is an amazing control driver and Hyzer Flip disc. I’d say that this is one of the more perfect Hyzer Flip discs, too, due to the flight ratings. It doesn’t take much power to get up to speed, has the ability to really glide, it will turn over fairly easily, and won’t give much fade on the backend. In my eyes, it’s one of the better discs for Hyzer Flips. That’s why it’s my #1 control driver for these throws. It’s just effortless. Grab an Underworld here on InfiniteDiscs.com.

The Fuse is one of the most popular Hyzer Flip discs in the #discgolfcommunity. If you go asking for a good Hyzer Flip disc, this disc will undoubtedly get recommended more than any other disc. But the Fuse is an amazing disc overall. Even though it only has a -1 turn rating, it doesn’t take much effort for the thrower to get this disc to turn over and it has no fade at all. That makes the Fuse a perfect tunnel shot or straight shot disc…because this disc will go dead straight with a perfect Hyzer Flip. Grab your Fuse here on InfiniteDiscs.com.

The Ultimate Guide to Disc Golf Field Work: 7 Tips to Use Today!

How to Play Doubles Disc Golf: The Quick Guide

Check out the book