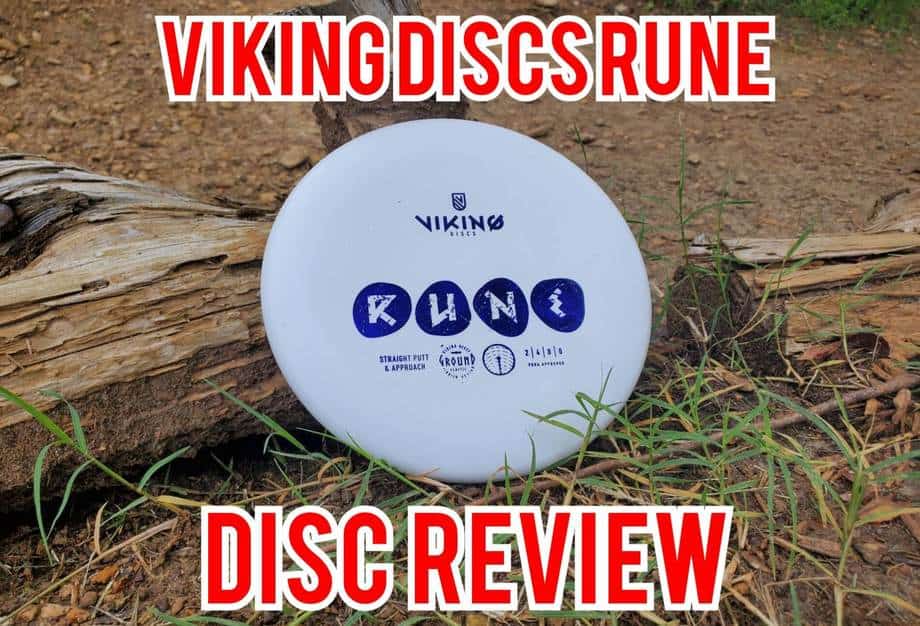 From the very first time I played disc golf, I was hooked. It was an exciting game made even more fun by all the different courses, throws, and discs you can use. I played a lot in the first year. And it helped that I found a couple of great discs to use including the Dynamic Discs Judge and Sheriff, the Innova Leopard, and the Discraft Buzzz.

But for a long time, I had trouble finding a new putter that I really liked. Then one day, I ended up finding not just one putter, but two that I really thought were on par with my favorite disc: the Dynamic Discs Judge. The first disc I found was the Infinite Discs Tomb. That disc was awesome and I ended up writing a pretty shining review of it here on the site.

Then I was able to try out a few European discs, including some from a company called Viking Discs. That’s when I finally found the Viking Discs Rune Putter – one of my new favorite disc golf discs.

In this post, I’m going to go over everything to do with the Viking Discs Rune and review it as best I possibly can. Hopefully this review will help you make a decision on whether you want this disc in your bag or not.

General info about my disc

The Rune, approved by the PDGA in 2017, is an extremely solid putt and approach disc made by Viking Discs out of Finland. This low-profile disc is meant for mainly putting but can be utilized in all kinds of short approach-type situations and short drives.

My Rune came in Viking’s Ground plastic. This is their least durable quality of plastic, similar to standard DX plastic. This plastic makes it very grippy. The Rune has a beaded profile around the edge and a small crease on the inside rim of the disc. Aside from my review, I’ve used it mainly for putting.

Flight ratings on the Rune:

The Rune is marketed as an understable putt and approach disc, which I believe is correct. However, the flight ratings make it out to be just a little bit straighter than it feels when you throw it. If I were to put flight ratings on it, the ratings would be 3, 4, -1, 0. But you can’t really tell this from putting. This is the same with most putters.

The numbers I listed above reflect actually throwing the disc for approach shots and short drives. I believe this disc needs a little bit more speed to fly as far as it says it can. And after it’s thrown, it will be ever so slightly understable during flight.

The Rune comes in the following plastic types:

Ground: this is Viking Discs’ baseline plastic similar to Innova DX plastic. BUT there’s a difference in quality between other major brands and Vikings baseline plastic. Ground plastic doesn’t hold up well. I personally like the grip of Ground plastic better than Innova DX plastic and Dynamic Discs Prime plastic. But again, Ground doesn’t hold up very well. So if you like Ground plastic, I highly recommend having a couple of each individual disc because you’re going to go through them fast…my first Rune was almost ruined in less than 1 disc golf season without even playing as much as I normally do.

Storm: Storm plastic is the translucent, durable plastic blend from Viking Discs. It is similar to plastics like Elite Z from Discraft, or Champion from Innova. This plastic is a huge step up in quality and most definitely a great investment into their discs if you like the Viking Discs brand. I have a couple of their other discs in more quality plastics and I’ve got to say, super impressed. Those reviews will be coming soon!

Armor (+Warpaint): Armor is the top-of-the-line, premium plastic from Viking Discs. It is similar in feel and grip to other premium, opaque plastics like Innova’s Star, or Latitude 64’s Gold Line plastic. This plastic can really take a beating and is worth the extra few dollars. Warpaint, for a few more dollars, is a really cool looking custom paint job on top of the Armor plastic. Your basically paying for the design (similar to paying for a custom Buzzz disc).

Low profile with a bead.

What Viking Discs has to say about the Rune

“The unique feel on this putter is amazing! It’s low profile with slow speed and minimal bead will make you connect with this disc immediately. The bead will make the flight path last longer and you can trust your discs even after a long time of using them. Rune will hold any line you put it on. Rune is also great for putting; it is stable enough to fight against the wind and the flight path is easy to predict.”

The Rune tends to fly very well outside of putting. I like this disc a lot for approaching and short drives so here’s what I’ve found when you really let this thing fly.

1. Hyzer – when I threw the Rune on a hyzer line, it flipped up to flat and flew straight as an arrow with no hyzer on the end.

2. Flat – on my throws that I released flat, the Rune flipped up a little bit and kept up with the anhyzer and hyzered back to finish straight.

3. Anhyzer – when I threw the Rune on an anhyzer, it held the anny line the whole time and finished off to the right.

For more on how the disc flies, check out the disc review video below the final thoughts section.

1. Brilliant putter: I’ve become a huge fan of the Rune when it comes to putting. I used the Dynamic Discs Judge for a long time before I found anything else I really liked. Then I found the Infinite Discs Tomb and the Viking Discs Rune. I’ve liked all three discs so much that all three are now in my bag. The Rune, though, is a beast. I just wish the Ground plastic held up better (see con #2).

2. Excellent approach shot disc: this disc will truly hold the line you put it on. I mean, wow. It also usually stays dead straight unless you really put a lot on it. For approaches, the grippy plastic grabs the ground and does not roll…at least from what I’ve seen in almost all of my approaches with it.

3. All plastics are grabby: the Ground plastic is interesting and will definitely have a spot in my bag over most other base plastics. And even though the more durable plastics are slicker, they still have some grab to them and that intrigues me.

1. Won’t drive farther than 250 feet: this isn’t by any means a driving putter so I’m not knocking it by much. There are many other putters that go beyond 250 feet (like the Discraft Luna) so I don’t really need this disc to go past 250 feet. It can if you REALLY sling it but it’s just not meant to be a distance disc. Again, that’s okay, because it’s a putter.

2. The ground plastic isn’t durable: like I said a little bit earlier, the Ground plastic is nice in feel, but terrible in durability. Solve this by having a couple Runes on hand or by upgrading to the Storm plastic.

My overall rating from 1 to 10

On a scale of 1 to 10, I’m rating this putter at 8.5/10. Now I’d say that’s a pretty good grade overall because the putter itself is overall a very good putter. I’m not going to rate it above that because I believe it falls into the category of a few other really good putters like the Discraft Zone and the Innova Aviar.

The Rune is very good. The pros of this disc make it so. But there are a couple of cons that pull the rating down to a 8.5/10 for me. I listed those above in the Pros and Cons section.

The Rune also has an official rating on InfiniteDiscs.com: 4.81 stars out of 5 with over 21 reviews.

I really like the Rune. Over the last few months, I’ve thoroughly tested it out and it has become one of my favorite putt and approach discs. For putting, this thing is dead on. It will grab the chains and make you look good. On approach shots, the Rune will hold your lines and would make an excellent tunnel shot disc. I tend to use other discs for driving, but the Rune could be your short range driving putter as well if you so choose. Overall, the Rune is a fantastic disc.

If you want to see how this disc flies, check out Disc Golf Examiner’s review of the Viking Discs Rune below ⬇️.

Where to get this disc

There are two places to get the Rune:

1. InfiniteDiscs.com – I would highly recommend getting this disc from Infinite Discs since this is their brand. Since they are the one’s who get it made, they normally have the best prices and the shipping is fairly cheap.

2. Amazon.com – Getting them from Viking Discs through Amazon is also another great option. If you can’t find them on InfiniteDiscs.com, grab one here on Amazon.

If you’re looking for some other great discs, check out my recommendations below ⬇️!

New to disc golf? Check out the book!